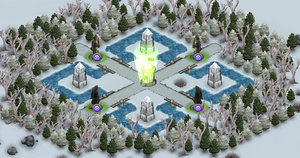 Rief was a Guthixian druid active during the late God Wars who was adept in fire magic. Rief appears only in the FunOrb strategy game Armies of Gielinor. He is mentioned in the Memorial of Guthix through the echo of the Sword of Edicts and the echo of the Balance Elemental.

Unlike the druids in modern RuneScape, he wears a green robe instead of a white one.