From the RuneScape Wiki, the wiki for all things RuneScape
Jump to navigation Jump to search
This article is about the God Wars participant. For the former Dagon'hai member, see Elder Dag'eth. 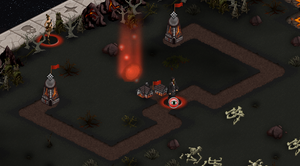 Dag'eth was a Zamorakian mage active during the final days of the God Wars. Dag'eth was amongst those present in one of the God Wars' last great battles, in what is now the Wilderness. He only appears in FunOrb's Armies of Gielinor, and as such certain details regarding his canonicity are debatable.

Dag'eth appears only in "The End of an Age" level, which is set during the last days of the God Wars. During the battle, he must strategically counter distinguished forces, amongst them prominent military leaders such as General Graardor and Commander Zilyana.

Whether Dag'eth survived the battle is unknown. In the mission, Dag'eth is defeated by the player, Guthix.