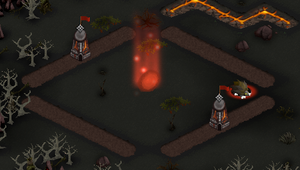 Dinsdale as he appears during the End of the Age level. Note the Seren formed Path.

Dinsdale was a trained Grenwall who fought for Seren during the final days of the Third Age. They only appears in FunOrb's Armies of Gielinor.

Dinsdale appears in the "End of an Age" level, which is set near the very end of the cataclysmic God Wars. It is likely that Dinsdale was defeated during the God Wars, as they were defeated in the game.