The address form is an item that is used in the King's Ransom quest. The address form is received as a piece of evidence when the player breaks into the Sinclair Mansion near Seers' Village. It is taken from the library on the 1st floor[UK]2nd floor[US] of the mansion. It proves that the Sinclair family had left for good and wasn't going to tell anybody where or why they were going. Once obtained from the house the player must then take the form back to the guard they talked to near the start of the quest. It has no other real use. 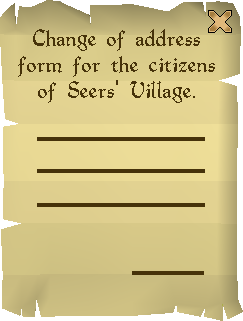 The form in detail when read.
Retrieved from ‘https://runescape.wiki/w/Address_form?oldid=31475286’
Categories:
Hidden category: