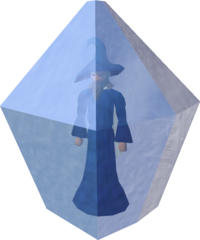 Merlin, trapped inside a crystal.

Merlin can be found on the top floor of the south-east tower in Camelot. If the player has not completed the Merlin's Crystal quest, he will be imprisoned within a block-shaped crystal.

After the quest, Merlin will be found in his workshop on the 2nd floor access via the main staircase to the north-west then go south-east.

Merlin along with the Knights of the Round Table are all captured due to the joint effort of Morgan le Faye and the Sinclair family, with Morgan having cast a spell against him that appeared to have stripped him of his powers. The loss of his magic has thus made Merlin befuddled, unable to concoct a plan to escape and stop Morgan. However, Merlin, after escaping from prison, regained access to his workshop and was able to break Morgan's spell, thus regaining his magical abilities, and he banished the Sinclair children back to their own mansion using his inventions to create chaos and the threat to turn them into rabbits should they leave again.

After successful completion of the Knight Waves Training Grounds which players can attempt to complete after they have completed the King's Ransom Quest, a player can speak to Merlin in order to add Camelot as a respawn hub in addition to Falador, Lumbridge etc.

Merlin is described by the RuneScape Game Guide as once "The most powerful wizard in the world", but his powers have been greatly weakened by his clashes with Arthur's half-sister, Morgan le Faye.

According to the Squire, Merlin was the one who cast the spell over the Knight Waves Training Grounds preventing anyone from using Prayer, Ranged or Magic within, and is responsible for teleporting players back out of the grounds should they die, with no loss of items. Upon completion of the Knight Waves, Merlin grants players the prayers chivalry and piety, as well as the ability to respawn at Camelot.

Merlin knows of Wizard Cromperty and claims that he is his 'wizard friend', suggesting that players seek his aid to free King Arthur from Morgan's magic.