The barcrawl card records player's progress in the Bar Crawl miniquest. It is given to player by a barbarian guard when they first try to enter the Barbarian Outpost north of Baxtorian Falls. If the player tries to read the card after finishing the crawl they will be told: "You are too drunk to be able to read the barcrawl card."

Passing the Barcrawl test gives the player access to the outpost, although in order to access the agility course within they still require 35 agility.

Completing the Bar crawl is a requirement for the Horror from the Deep quest during which players must talk to Gunnjorn inside of the agility course to obtain a spare key to the Lighthouse.

Completing the Bar crawl is also a requirement for the Scorpion Catcher quest, as one of the scorpions is inside the outpost however the agility level is not required since the scorpion is located in the entrance section. 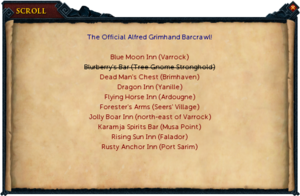 The update history project is a work-in-progress – not all updates to this topic may be covered below. See here for how to help out!
Retrieved from ‘https://runescape.wiki/w/Barcrawl_card?oldid=29044267’
Categories:
Hidden categories: