So how have you been? Twig Talk

Having 50 friends within walking distance never gets boring.

[1] did you look at wrong contribs page? o.o

Three have been made just edit this part and get teh codes. Twig Talk

A guam for you[edit source]

A clean one. Only one. You will accept it and keep it. It will be the best one in your collection. Why? Because I got 99 herblore on it.

Officially speaking, it went completely according to plan.

I've got the originals if you want to see them. =P

Nothing too drastic though,

Why are you so bad at this. You really are the worst.

Due to a shortage of avatars caused by avatar wardens constantly logging out with summoned avatars, Gareth and I would like to remind all wardens to dismiss avatars when logging out. To get the message across, we are removing the Avatar Warden jobs from all current wardens until they acknowledge the receipt of this message. If you wish to be a warden again, simply speak to Gareth or me, and we will change your job back to Avatar Warden.

If you think we need that image (which I don't, since images of text have been deemed unnecessary), here is what you should do:

You should know that we don't delete files just because a newer version has been uploaded.

Per Forum:Security of sysop accounts, we have removed your rights as you have been inactive for greater than 1 year. If you'd like your rights back, feel free to ask a bureaucrat.

Did you even think to sheathe your weapon first? Took me 10 seconds to figure it out, and most of that was finding another player.

One day the wiki name Isobel will be free ;-; Congratz on 96 Fishing, I'm on holiday now so hopefully I'll see you around over Christmas :)

You got the POWAHHHHH[edit source]

meant to do that on the other page, been a long day --

Oops. Ta fer catching that. I've fixed it oan the other page

"where generally no one is allowed to edit except for you" The history of my userpage is basically me reverting a bunch of vandalism. --LiquidTalk 23:19, April 5, 2017 (UTC)

Excuse me lol? That's not even my character, I think it was Ansela's, but I may be misremembering. --

XD i kinda figured you were joking, i was tired when i read that and its hard to tell through text. But still tho - nice meme --

Source Says there how ToG is supposed tae be affected

In this case it was a link to the RS documentary, but you are right, the link should remain the same as the update post on the website.

He added the link to his personal video on 2017 Easter event, but the link he changed on the Update:Easter Miniquest & Guthixian Butterflies was changing the link from the RS YouTube account to the link for the RS Documentary. Anyways, you fixed it, just wanted to clarify :P

Nevermind I durped... I clicked on the actual link to the documentary instead of his PKing crap... Just ignore this discussion :P 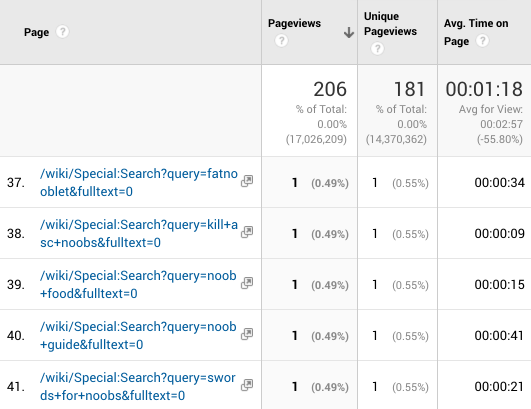