Doric's Quest was a quest mainly featuring Doric. This quest was replaced by What's Mine is Yours.

Doric the dwarf is happy to let you use his anvils, but first he would like you to run an errand for him.

Doric can be found in a small building on the intersection of the roads north from Falador, east of Taverley, and south of the Goblin Village, directly in front of the city gate to Taverley.

Ask to use Doric's whetstone OR his anvil. Doric will tell you he needs some materials in order to manufacture some pickaxes. He will hand you a bronze pickaxe. He wants you to get him:

Where you obtain the ores is irrelevant, and can be obtained from either another player, the Grand Exchange, purchasing from the Dwarven ore store in the Dwarven Mines underneath Ice Mountain and Falador, or by mining the ores yourself (level 15 Mining is required for iron ore). You can mine these ores in any mine that produces these ores in the game.

For a "safe" area to obtain all of these ores, you can also travel to the mine at Rimmington, directly south of Falador.

When you have all the ores needed, return to Doric to finish the quest. The ores have to be unnoted or Doric will not accept them. If you have the ores with you when you start the quest, simply talk to Doric again after he asks for the materials. 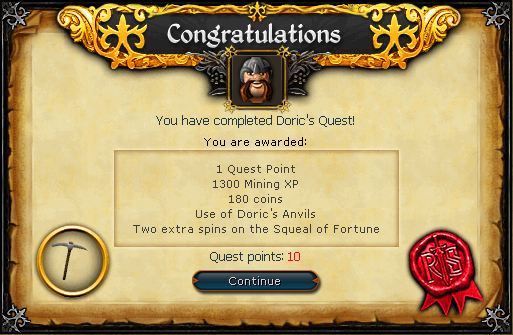