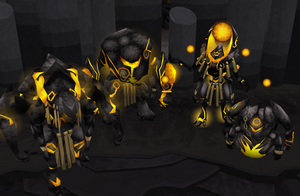 TokTz-Ket-Ek-Mack is performed in the opera.

The Three Tokkul Opera is a recreational opera house located in the TzHaar City. It was constructed in the Year 169 of the Fifth Age for the TzHaar playwright TzHaar-Hur-Brekt, and has since seen the introduction of one play, called TokTz-Ket-Ek-Mack. Players can see a play after the completion of TokTz-Ket-Dill.

Players can visit the opera during a cutscene by speaking to Hur-Brekt in the elder mine in the northeast of the TzHaar City.