The language itself has not been translated fully, and as of yet only a small amount is known thanks to the translations of the Wise Old Man. It is important to note that, according to the Wise Old Man, "The key is to realise that TzHaar words are more about the emotion or passion behind the word than any kind of direct translation.".

As of yet, there is not nearly enough words translated from the TzHaar language to have a conversation or even speak entire sentences. It is mainly used by players to help themself understand what TzHaar say when they do not translate some of their phrases into "JalYt language". Most of the current knowledge consists of nouns, adjectives, and an extremely limited selection of verbs. 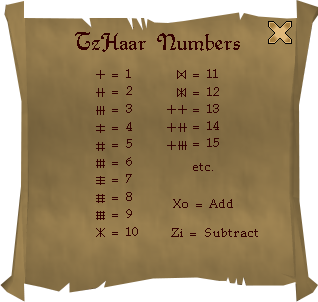 The numbering system used by the TzHaars was introduced during the TokTz-Ket-Dill quest. This is shown in the notes stuck to the inside cover of the TzHaar Tourist Guide.

The TzHaar count in a slightly different way from humans. The basis comes from their anatomy: they have 4 arms with 3 fingers on each, and this is reflected both by the base of twelve as well as how the numbers are written.

All numbers are collection of lines. The numbers are based on their four arms and three fingers, on each arm, and what is necessary in order to count to a certain number is what the lines represent. For every hand that a TzHaar needs to use, one horizontal line is added. For every finger on the last hand that needs to be used, one vertical line is added. However, if all four hands are necessary, they make an X shape instead of four horizontal lines.

Examples of TzHaar numbers are in the note in the Tzhaar tourist guide.

The TzHaar are usually happy to speak the human language, but sometimes it is useful to know the TzHaar language (especially during quests). TzHaar words are usually short and almost always end with a consonant (with the exception of E), even though it's not always fully pronounced.

These have been stated in game or by Jmods.

Some basic words can be combined into more complex words. Here are some examples: