From the RuneScape Wiki, the wiki for all things RuneScape
Jump to: navigation, search
TzHaar-Mej-Jeh? (edit) 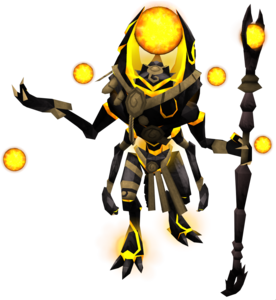 TzHaar-Mej-Jeh is the starting NPC for The Elder Kiln and The Brink of Extinction.

After completing The Elder Kiln, TzHaar-Mej-Jeh can be found in the main plaza. Players may also give all three TokHaar-Kal capes to TzHaar-Mej-Jeh to unlock the Enhanced fire cape override.

In the year 169 of the Fifth Age, the TzHaar began to notice that many of their newborn TzHaar were ending up as deformed TzHaar. Jeh had an egg of its own, but its fellow Mej believed it was unsalvageable. Jeh flagged down a passing human adventurer and asked them to assist in heating up its egg, confident that it would grow into a healthy TzHaar. Unfortunately, their actions are in vain, as a Ga'al emerges, which has failed to retain memories and is both caste-less and lawless. As a result, TzHaar-Mej-Ak takes the Ga'al to the Fight Pits, where Ga'al are normally killed, not knowing how to fight.

The adventurer attempts to save TzHaar-Mej-Jeh's Ga'al, but it is ultimately killed by the TzHaar champion. Jeh appears to have feelings for its Ga'al, even though TzHaar are supposed to "Treat each other equally". 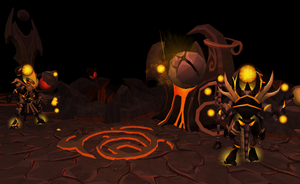 TzHaar-Mej-Jeh attempting to rescue its egg.

After the adventurer infuses Ga'al-Xox with the memories of the TzHaar champion's Tokkul, Jeh ignores the Ga'al's pleas to not attempt to pass Tokkul memories onto Ga'al, determined to save the declining TzHaar numbers.

The following takes place during The Brink of Extinction.

Despite the TzHaar's attempts to stem the amount of Ga'al, more of them continued to be born with each passing moment. Jeh met with the adventurer who helped it before and requested them to collect the Tokkul of famed TzHaar champions, while Ak tasks the player to find three Ga'al. Upon completion of their tasks, Jeh accompanies Ak and the Ga'al to the Elder Kiln. Before the Ga'al can be converted, Ga'al-Xox appears kills Ak, which results in Jeh proclaiming the Ga'al as a criminal for slaying a TzHaar on sacred ground. Jeh asks the adventurer to capture Xox so that it can be tried for his crimes. Jeh used its divination to maintain contact with the adventurer.

As the adventurer chases Xox through the tunnels, Jeh learns more about its TzHaar ancestors and the TzKot-Ko, the latter of which it did not know about. The adventurer continued to obtain information for it; Jeh also learned of an ancient tradition in which Tokkul was returned to the sacred lava to ease their passing, and that the tunnel used to be maintained by the TzHaar, but neglected over time. Both of these confused and angered Jeh, as it wondered why such important traditions were neglected and lost by its time. Eventually, Jeh lost contact with the adventurer, who had gone deep into the tunnels.

After restoring the flow of lava to TzHaar City, Jeh informs the adventurer that healthy TzHaar are hatching from the eggs. It later agrees to go to the Elder Kiln to meet with Xox and Hok. Jeh is still stubborn with the Ga'al, intending to infuse Tokkul into them. This prompts Xox to be reforged a second time with Ak's Tokkul. Upon listening to Ak's pleas to die, Jeh realizes that change must be implemented and promises to return the Tokkul to the sacred lava. Jek also promises to give the Ga'al their own caste and help them find their place in TzHaar society. Jek later holds a gathering to inform the other TzHaar of the adventurer's role in saving TzHaar society.

When Hok returned to the city to convince the TzHaar to return to the lava as Ful returned and reminded them of their ancient duty, Jeh declined the offer, unwilling to give up its independence. It was unsure if it made the right decision, but after some helpful words from the adventurer, Jeh decided to ponder on what they meant.