From the RuneScape Wiki, the wiki for all things RuneScape
Jump to navigation Jump to search
The entrance to the Fight Cauldron 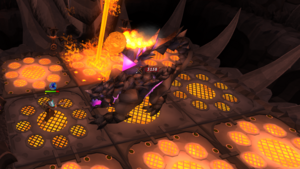 A player participating in the Fight Cauldron

The Fight Cauldron is located South-East of the Main Plaza in the TzHaar city. It is the fourth TzHaar minigame to be released, after the Fight Pit, Cave, and Kiln respectively, and can only be accessed after completion of The Brink of Extinction. Summoning familiars may not be brought into the Fight Cauldron. Within the Fight Cauldron, players battle endless waves of TokHaar monsters to receive combat experience, obsidian shards used to smith the level 60, hybrid obsidian armour, and other miscellaneous drops.

The Fight Cauldron takes place in a medium-sized square-shaped arena that is entered from a hot vent door to the west. Players may leave the minigame at any time by exiting the vent door, or by allowing themselves to be killed; as the Fight Cauldron is a safe minigame, players who die will respawn at the Fight Cauldron bank in the TzHaar City with their items intact and fully restored stats. However, potion boosts will wear off, overload timers will be depleted, and you will lose half of the shards that you earned while in the arena.

The Fight Cauldron will spawn waves of TokHaar monsters, one after the other. These monsters are stronger versions of those found in the Fight Kiln, though not all of the Kiln's monsters appear in the Cauldron. The monsters that can appear are:

The arena's floor is divided into a 3x3 grid of squares. At regular intervals, some of these squares will begin to glow with heat; after a few seconds, players standing on a glowing square will take damage equal to 20% of their maximum life points every game tick. The square will cool off after about 10–15 seconds and will be safe to stand on; however, the same square of floor can heat up twice in a row. The middle northern square is always hot because of the sacred lava constantly pouring down onto it. It is not possible for all nine squares to simultaneously glow with heat; at most, the eight surrounding squares will glow while the ninth square in the middle will remain safe. It is necessary that players keep an eye on the floor at all times to avoid taking massive damage. 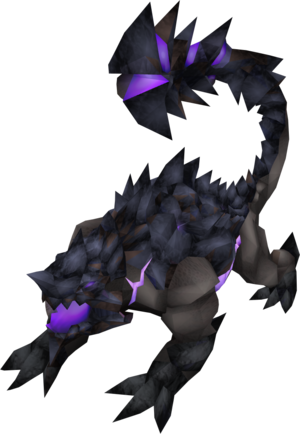 The coffer used to donate TokKul.

Unlike the Fight Cave, Fight Kiln, and TzekHaar Front, the Fight Cauldron does not have an end, a final boss to fight, or a reward for completing it. The reward is a number of obsidian shards based on how many and what type of opponents players defeat. Players are simply assailed by wave after wave of TokHaar until they die or leave. However, if players die, the number of shards rewarded is cut in half, so it is better to leave.

Obsidian shards are rewarded after the end of the game. Stronger monsters are generally worth more shards. 12 obsidian shards may be smelted at a furnace into an obsidian bar, which may be used by players with high Smithing levels to create obsidian armour, powerful multi-class armour that is exceptionally effective against TzHaar and TokHaar monsters. Each armour piece provides a damage reduction against their attacks, for a total of 45% (or 55% including the kiteshield) for the full set; additionally, each helm (warrior, ranger, and mage) increases the accuracy of its class's attacks by 10%. The shards can also be used to repair the armour. The armour does not degrade when used outside of the TzHaar City and its minigames; however, it also does not provide the damage reduction or accuracy boost.

Aside from obsidian armour, double combat experience is awarded for defeating the TokHaar monsters. As the Fight Cauldron is a safe minigame, it is a risk-free, competition-free method for training combat skills.

Near the hot vent door that leads into the Cauldron's arena is a coffer, into which players may donate TokKul for a temporary increase to the damage reduction of obsidian armour when fighting TzHaar or TokHaar. 15,000 TokKul buys a 10% increase in damage reduction, bringing the total for a full set to 55% (or 65% including the kiteshield). This boost lasts 20 minutes. Paying 45,000 Tokkul allows the 10% extra damage reduction to last the maximum duration of an hour.

The TokHaar monsters can also drop various items, including noted uncut gems up to Dragonstone, Soft clay, Onyx bolt tips and extremely rarely, an Uncut onyx. If you are challenged by TokHaar-Hok and manage to defeat him, you will be rewarded with an Antique lamp worth 20k experience in either Attack, Strength, Defence, Constitution, Magic, Ranged, Summoning, Slayer, Herblore, or Prayer, with the lamp having a level 80 requirement to use on any of the skills.

This information has been compiled as part of the update history project. Some updates may not be included - see here for how to help out!
Retrieved from ‘https://runescape.wiki/w/Fight_Cauldron?oldid=35971455’
Categories:
Hidden categories: