From the RuneScape Wiki, the wiki for all things RuneScape
Jump to: navigation, search
Ga'al-XoxTzHaar-Ga'al-Xox'tal, Ga'al-Xox and TzHaar-Mej-Ak? (edit) 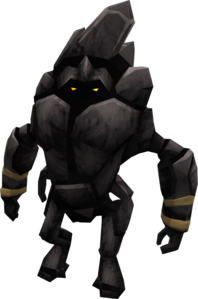 Ga'al-Xox is one of the oldest Ga'al that were born due to the cooling of Karamja Volcano. He is sent with the player to the Elder Kiln to run an experiment for TzHaar-Mej-Jeh, which aimed to give Ga'al the memories of other deceased TzHaar from the past. It is hinted that if he were born successfully, he would have become a TzHaar-Xil, as he masters using a Toktz-xil-ul very quickly when it is presented to him by the player.

Towards the end of the quest, Ga'al-Xox becomes infused with the memories of TzHaar-Ket-Yit'tal, the late champion of the Fight Pits, and it is discovered that TzHaar are still aware when they have been turned into Tokkul. He also explains that the experience is horribly painful. He insists that TzHaar-Mej-Jeh and TzHaar-Mej-Ak do not continue with their idea of having Ga'al bound to the memories of previous TzHaar. When they make it clear they will continue with it, he claims that he is done with the TzHaar society. During a cutscene at the end of the quest, it is shown that he returns to TokHaar-Hok, the TokHaar who greets the player and allows them to attempt to fuse Ga'al-Xox with the memories of the deceased Fight Pits champion.

Xox explains why Ga'al were born

During The Brink of Extinction the TzHaar continue their experiments on fusing Ga'al with tokkul, despite Ga'al-Xox's warnings. To stop this Ga'al-Xox kills TzHaar-Mej-Ak, one of the mages responsible for the experiments in an effort to stop this from happening. Ga'al-Xox then flees out of the cave into another and the player runs after him. In the last room of the cave lies the source of the TzHaar's troubles. The TokHaar shut off the flow of sacred lava in an attempt to bring back the TzHaar to the heart of the volcano. The player and Ga'al-Xox reopen the valves. After this TokHaar-Hok challenges you to a battle. After defeating him Ga'al-Xox and the player return to the main plaza and infuse the tokkul of Tzhaar-mej-ak with Ga'al-Xox. Tzhaar-mej-Ak tells TzHaar-Mej-Jeh, one of the mages leading the experiments, how horrible it is to be tokkul. After this Ga'al-Xox returns to the sacred lava.

This information has been compiled as part of the update history project. Some updates may not be included - see here for how to help out!
Retrieved from ‘https://runescape.wiki/w/Ga%27al-Xox?oldid=35592937’
Categories:
Hidden categories: