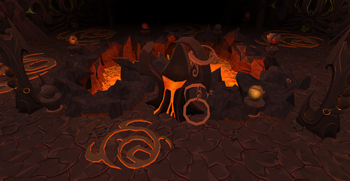 The Birthing Pool, where TzHaar are born.

The Birthing Pool is a pool of lava around which TzHaar eggs are hatched. It is found north-east of the Main Plaza of the TzHaar City and west of the entrance to the Fight Kiln. The eggs are put on small platforms near the pool and guarded by six non-attackable TzHaar-Kets. A large birthing font holding a grey, cracked egg close to hatching is found in the south-east indentation of the pool. TzHaar-Mej-Ak and TzHaar-Mej-Jeh is found next to the font, with TzHaar-Mej-Jeh casting fire spells at the egg, trying to make it hatch normally. He starts the quest, The Elder Kiln. His attempts are futile, however, as the egg hatches into Ga'al-Jeh.

When examining an egg it says, "This egg is glowing with signs of life".