From the RuneScape Wiki, the wiki for all things RuneScape
Jump to: navigation, search
This article is about the Large Geyser in Neitiznot. For other geysers, see Geyser (disambiguation).

A Large Geyser is a water source in Neitiznot and in the God Wars Dungeon. The geyser in Neitiznot is very close to the bank, and as such it is useful for filling up water storage items.

It will produce a jet of water every 12 seconds, which only affects its appearance while making a water-spray sound. A second sound of water near the large geyser comes from a small geyser that is inaccessible to players. 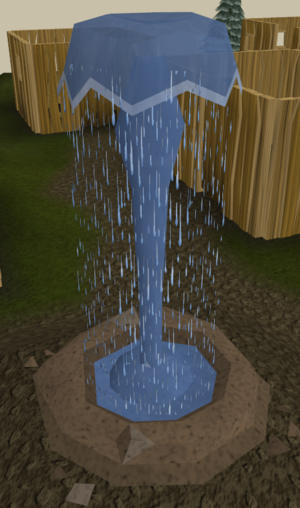 The geyser pruducing a jet of water.