The Yak Pen has level 42 yaks residing in it. As they are in a pen, low level players can safe spot them behind the fence.

They drop Raw yak meat which can be cooked, yak hair which can be woven into rope, Yak-hide and bones. Yak hair can be spun on the spinning wheel nearby and Yak-hide can be crafted with the crafting equipment which can be bought from Jofridr Mordstatter. They also have a rare but valuable drop of Fremennik yak (unchecked) for use on the Player-owned farm. They are close to the bank on Neitiznot.

The woodcutting stump can be used to split your arctic pine logs, cut from the abundant Arctic Pines in the area, and make Fremennik round shields. There are four woodcutting stumps, two on the north island of Neitiznot, and two on the snow-covered island to the north.

There are three mines in the Fremennik Isles. Be wary - dangerously aggressive ice trolls dwell near the mines.

The isle of Neitiznot is also useful when training Smithing. The settlement has a bank right next to a furnace, only a small distance apart. The bank is without the usual doors or entrances that can be a hindrance when running between the two spots in most other locations as well (Edgeville's furnace is still a more desirable location due to the bonus of double smelting an ore on occasion). Jatizso conversely hosts an anvil almost as close to its own bank, making the Fremennik Isles an even more desirable place to smith.

The fishing spots on Jatizso's dock and on the island itself are all very close to the bank and are decent for training. The spots there have big net fishing, both kinds of harpoon fishing, and lobster fishing and as an added bonus are relatively quiet even compared with the Fishing guild.

A player on the fishing dock

There is also a Spinning wheel to the south-east of Neitiznot which is relatively close to the bank and supersedes Seers' but is inferior to the Lumbridge wheel in terms of time taken. However, it does not have any stairs to climb so it is good if you can't be bothered with the extra clicking. 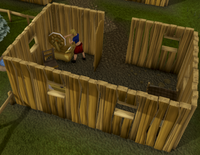 A player spins flax into bowstrings