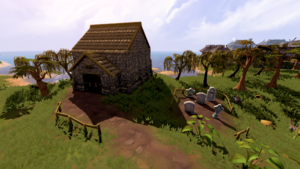 The church south-west of Port Sarim.

A Church is a building in RuneScape that usually contains an altar. Players can pray at an altar to replenish their Prayer points. Some churches have an organ in them, which can be played for pure entertainment.

Churches are located in many areas in RuneScape, but mostly cities and towns, particularly for Saradominist churches. Churches are usually empty except for NPCs, typically overseen by a person of faith.

This information has been compiled as part of the update history project. Some updates may not be included - see here for how to help out!
Retrieved from ‘https://runescape.wiki/w/Church?oldid=35683720’
Category:
Hidden category: