From the RuneScape Wiki, the wiki for all things RuneScape
Jump to navigation Jump to search
The Old School RuneScape Wiki also has an article on: osrsw:Zadimus corpseThe RuneScape Classic Wiki also has an article on: classicrsw:Zadimus Corpse
Item JSON: {"edible":"no","disassembly":"yes","stackable":"no","stacksinbank":"yes","death":"always","name":"Zadimus corpse","bankable":"yes","gemw":false,"equipable":"no","members":"yes","id":"610","release_date":"27 January 2003","restriction":"quest","release_update_post":"Shilo Village Quest online","lendable":"no","destroy":"Drop","highalch":1,"weight":0.5,"tradeable":"no","examine":"The remains of Zadimus.","noteable":"no"} 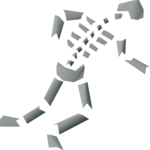 The Zadimus corpse is a quest item that is obtained during the Shilo Village quest by searching the ancient gallows in the temple of Ah Za Rhoon. The corpse must be given to Trufitus in Tai Bwo Wannai village. Afterwards, it must be buried next to the tribal statue in the middle of Tai Bwo Wannai. The Spirit of Zadimus then appears and gives the player the key to Rashiliyia's tomb.

Though it cannot be dropped, the Zadimus corpse can be lost upon death or alchemised using Magic for 0 coins. Simply search the gallows again to reclaim it.

Burying the corpse does not give any prayer experience.

This information has been compiled as part of the update history project. Some updates may not be included—see here for how to help out!
Retrieved from ‘https://runescape.wiki/w/Zadimus_corpse?oldid=35682419’
Categories:
Hidden category: