Shilo Village is a village on Karamja. It is only accessible to players that have completed the Shilo Village quest.

Shilo Village has two entrances: the gate to the east by speaking with Mosol Rei, and a tunnel shortcut under the northern wall (requiring completion of the Elite Karamja Tasks and level 74 Agility, which is boostable). Two items, the Slayer cape (99 Slayer) and the Karamja gloves 3, provide direct access to the village. When walking to the village gate, you may be required to cross Karamja's north/south river with the log balance east of the Gleaming wisp colony and circumnavigate the Jade vine maze as well as the waterfall stepping stones just east of the gate. Crossing these agility shortcuts requires no agility level, but still carries the possibility of failure which will result in lost life points. 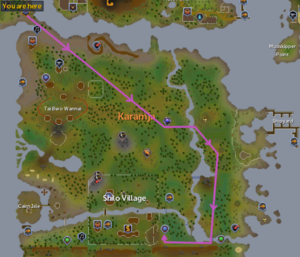 Walking to the Shilo Village gate from the Karamja lodestone.

This method involves the most walking, but it requires no special items nor quests completed. Head south-east from the Karamja lodestone in Brimhaven until you reach the Gleaming wisp colony, then head due east. When you reach the log balance shortcut, cross and continue south around the Jade vine maze until you come across the waterfall with Jogres nearby. Cross the stepping stones just to the west, and continue due west to reach the eastern gate of Shilo Village.

You can teleport to the Herblore Habitat area using a Juju teleport spiritbag (purchasable on the G.E.). From there, you can climb over the vine just north east of Papa Mambo and walk westward all the way to Mosol Rei. You can then right-click Mosol Rei and choose the enter-village.

Players who have completed the Shilo Village quest may use the Shilo Village cart system, which is run by Hajedy in Brimhaven. For a price of 10 coins, he will take the player to Vigroy in Shilo Village. The reverse trip is also possible. This makes it easy for the player to access Shilo Village if they first use the Catherby Lodestone, then travel by ship to Brimhaven or teleport to the Karamja Lodestone and then walk north until they get to the fruit tree patch and then east. Alternatively, if the player has planted a Spirit tree in the patch in Brimhaven, they could just walk north-west of it to reach the cart.

Karamja gloves 3 provide a teleport to the underground part of the Shilo gem mine. This can also be used to reach Brimhaven by taking Vigroy's cart from the south western corner of the village.

The Slayer Cape can be used to teleport directly to Duradel (or Lapalok after While Guthix Sleeps), in the north eastern section of the village.

The fairy ring CKR, south of Tai Bwo Wannai, can be used to reach Shilo Village, but you will have to walk around the south and enter by the east gate if you don't have the agility level and achievements to use the northern tunnel shortcut.

The fairy ring CJS within the Kharazi Jungle (requires partial completion of both A Fairy Tale II - Cure a Queen and Legends' Quest as well as 5 bittercap mushrooms in order to repair the ring if not already done). After teleporting, run west and exit the jungle north to reach Shilo Village.

Take a Gnome glider to the Gandius location (requires completion of The Grand Tree quest) and run west past the overgrown idol and then south until you reach the waterfall with stepping stones which you must cross. After successfully crossing the stones, run directly west to the broken cart and cross to enter the village.

Lady of the Waves[edit | edit source]

In the upper floor of the village fishing hut, talk to Seravel to buy a ticket for the Lady of the Waves. It costs 25 coins, and the player can go to either Port Khazard or Port Sarim by presenting the ticket to the boat west of the Shilo Village.

There are several areas to train skills in Shilo Village:

In the north-west corner of Shilo Village are seven gem rocks. Players who mine these rocks (level 40 Mining required) get gems instead of ore. Players mining gems here may obtain the following gems:

After completing all of the Karamja Tasks up to hard difficulty, players may access a second gem mine found underneath Shilo Village. This mine contains 8 gem rocks, placed along the outside perimeter of the dungeon. Players may access this mine with the teleport function on their Karamja gloves 3 or by a ladder found near the surface gem mine. This also contains the entrance to the Gemstone cavern where gemstone dragons are found.

Players can train Smithing by using the Shilo Village furnace directly across from the bank. It is the closest furnace to a bank in the game (9 squares).

Players can train their Ranged, Magic, or Melee skills by safespotting the Undead ones over the gate. They are vulnerable to the Salve amulet, and can also be safespotted with a halberd.

The shops in Shilo Village include a general store, fishing shop, and antique store.

Obli's General Store sells everything that a normal general store sells, and more. The most notable things are the charcoal and papyrus, used in the Legends' Quest. It also sells packs of 50 vials, both filled with water and empty, which respawn very slowly. However, the maximum quantity in the shop is 20 packs of each, amounting to a total of 1000 vials.

Yanni Salika owns the antique store in Shilo Village, and is also the starting point for the One Small Favour quest. He will trade players coins for several old quest items from both Shilo Village and Zogre Flesh Eaters.

Kaleb Paramaya runs the Paramaya Inn in the northern part of the village. The inn has no use after RuneScape Classic, but Kaleb still sells wine and beer. Players also come here to claim their Karamja gloves 2 after completing the Medium Karamja Tasks.

Players with a combat level of 100, as well as a Slayer level of 50 can get Slayer assignments from the now third highest levelled Slayer Master Duradel. He is upstairs in the house that has the Slayer Master mark on it on the minimap. From the fishing shop go up the ladder and cross the bridge to get to Duradel.

After While Guthix Sleeps, Duradel will be replaced by Lapalok who gives identical assignments.

Shilo Village contains a small obelisk on the west side of town for recharging Summoning points. Occasionally, Pikkenmix will appear by it and offer to let the player play Familiarisation, a summoning Distraction and Diversion. If Pikkupstix gives the clue: "I hope the villagers' defences hold against those zombies.", the D&D is started here.

This is the list of music you'll hear in Shilo Village.

This information has been compiled as part of the update history project. Some updates may not be included - see here for how to help out!
Retrieved from ‘https://runescape.wiki/w/Shilo_Village_(location)?oldid=35680354’
Categories:
Hidden categories: