From the RuneScape Wiki, the wiki for all things RuneScape
Jump to: navigation, search
The Old School RuneScape Wiki also has an article on: osrsw:Arrowheads (Varrock Museum)

This article is about the item found as part of the Varrock Museum activity. For the items using in Fletching to make arrows, see Arrowheads.

Arrowheads are an item that players can find by cleaning an uncleaned find as part of the Varrock Museum activity. Unlike arrowtips, players cannot add them to headless arrows to make arrows. The arrowheads have no use, but you can put them in the crate by the southern-most door for a small reward, like a pot, or a bowl.

They are made of crude bronze and are extremely old, likely being from the Third age. They were used by the Zarosians of Senntisten.

Often, players new to the Varrock museum misinterpret the arrowheads to be arrowtips, which members may use in Fletching. However, when they try to connect the arrowheads with headless arrows, nothing interesting happens. 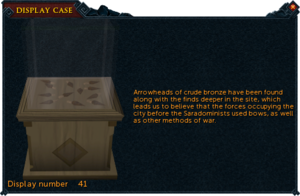