The ancient coin is an artefact obtained in the Varrock Museum activity by cleaning an uncleaned find. When a player returns it to display case 44 (ground floor[UK]1st floor[US], middle row, case to the west), they are rewarded with 10 kudos. It cannot be obtained after it is returned to its display case.

Although the coin is Zamorakian, it is from the time when the city was named Senntisten, before the Saradominists took over and renamed it Saranthium. This suggests that sometime during the God Wars followers of Zamorak controlled this city.

The display case information reads as follows: "A battered and bent coin with Zamorakian markings. It bears the word 'Senntisten', which we believe to be the original name of the city, Saranthium, before it was rebuilt by those loyal to Saradomin. Partial numbers on the coin would indicate that it is from the year 3740, presumably from the 3rd Age." 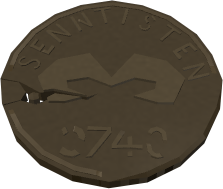 The coin bears the word "Senntisten" and the year 3740.

This information has been compiled as part of the update history project. Some updates may not be included - see here for how to help out!
Retrieved from ‘https://runescape.wiki/w/Ancient_coin?oldid=35662060’
Categories:
Hidden category: