The Varrock Museum is a building in Varrock located north of the east bank. Here, a player can study the history of RuneScape, clean specimens from Varrock Dig Site, and earn up to 198 kudos by completing various activities.

Free players can only view the ground floor[UK]1st floor[US] exhibits; they cannot access the upstairs or downstairs areas. 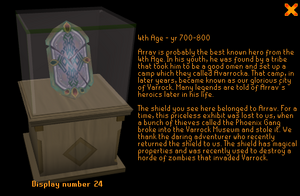 The restored Shield of Arrav on display

The Varrock Museum has existed in some form since the Fourth Age. It is known to have existed in the Year 1993 of the Fourth Age, when the Shield of Arrav was first displayed there; however, it is unclear exactly when it was established. As a result, little is known of its early history or development.

The Museum housed the Shield of Arrav for 150 years, after it was donated in 1993. This was evidently its "crowning piece," as the shield had played a massive role in the establishment of Avarrocka and, by extension, Misthalin itself. In 143, however, the Museum was infiltrated by agents of the Phoenix Gang, a criminal organisation primarily active in southern Varrock. 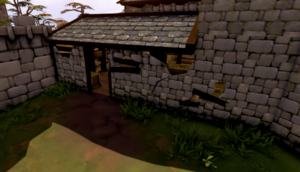 The entrance to the Black Arm Gang's hideout

The Phoenix Gang stole the shield with the intention of selling it on the black market, but suffered internal conflicts shortly afterwards. The Black Arm Gang developed from Phoenix Gang dissidents, and in the ensuing violence, the shield was broken in half, with each gang taking part of it. King Roald II issued Proclamation 262, promising 1,200 coins (a massive sum at the time) to any that would return the shield to the Museum's custody. However, it would not be until the Year 169 that the shield was recovered, during the Shield of Arrav quest.

In the Year 169, the Varrock Museum expanded its scope massively. After receiving a large donation from the Misthalanian government, the Museum itself was renovated to include three full stories, as well as an expansive underground area. The Varrock Tourist Office has presumably had a hand in the development of the Museum as well. A barge is also under construction near the Dig Site, apparently as part of a large project planned for an isolated island north of Morytania.

A massive digsite was recently created east of Varrock, near the west bank of the River Salve, as a means of researching the ancient cities of Senntisten and Saranthium. Ultimately, because of the events of the The Dig Site, this would play a major role in making the existence of Zaros common knowledge. 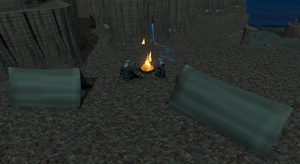 The Museum has also funded the research of many hired historians and archaeologists, who are working abroad to bring their findings to Varrock. Some, such as Anna Jones, have spent time studying the more immediate area around the city. Others, such as a natural historian found at the Rellekka Hunter area in the Fremennik Province, have conducted their research further afield. The Museum has expressed a strong interest in the Kharidian Desert, where a number of archaeologists have been sent. Varmen, a Museum employee, has begun to research the ruins of Uzer, although on a small scale. Archaeologists Kerner and Abigail have begun to research Ullek and the Scabarites that now inhabit it. Orlando Smith , a natural historian and employee of the museum, was the first to investigate the resting place of Guthix.

According to Museum employees, such as Lead Archaeologist Abigail, the Museum's rapid expansion has been very costly, and the Museum has already had some financial difficulties due to its spending. 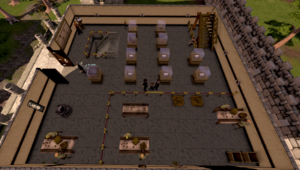 The ground floor[UK]1st floor[US] is the main floor of the museum. This floor is dedicated to artefacts from Varrock Dig Site.

The information clerk is located in the north-west corner of the ground floor[UK]1st floor[US] and has information about the three sections of the museum. A museum map is available of the exhibits. She will also give players rewards, depending on how many kudos have been earned.

The display case numbers are not in order. This is a diagram of case numbers, with the top of map being north.

The south end of the ground floor[UK]1st floor[US] is partitioned off for the processing and cleaning of incoming samples from Varrock Dig Site. Players wishing to participate in the activity must have completed the The Dig Site. Additionally, the player must be wearing leather boots and leather gloves and must also be holding a trowel, rock pick and specimen brush. All of these items are available from the tool rack on the south wall of the museum.

Start by taking an uncleaned find from the Dig Site specimen rocks pile. Use the uncleaned find on one of the empty Specimen tables to clean the sample.

Once a player finds something interesting (listed in the display case table above), they may show it to one of the four archaeologists in the room, who will then tell them what case to put the object in. Putting a sample in the correct case results in a reward of 10 kudos. Completion of the dig site participation section (5 possible finds) yields 50 kudos in total.

Some samples contain low value items such as bones, big bones, coins, iron daggers, uncut jade, and uncut opals. Some samples have no value and are not of interest to the archaeologists. These samples can be disposed of in one of the storage crates found in the south-east corner of the area. Disposing of a sample will give a player a random reward from the storage crate, usually of very small value.

Samples that can be placed in the crate include arrowheads, old chipped vases, pottery, and jewellery. The jewellery can also be given to one of the archaeologists, who will buy it for 5 coins.

Possible rewards from crate include:

A special specimen is the clean necklace – instead of recommending the player place it in a display case, the archaeologist will teach the player how to enchant a ruby necklace into a Dig Site pendant. Be aware that it may take up to an hour to find a clean necklace.

Some items are completely useless and cannot be used or placed in the crate, including broken arrows and broken glass. Occasionally, players will receive nothing at all: "The find crumbles to dust in your hands - oops! Better not let the professionals see that one!" 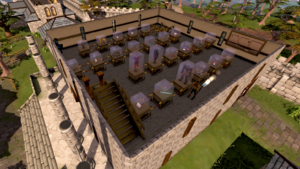 The first floor Of the Varrock Museum

The 1st floor[UK]2nd floor[US] has many display cases. Talking to Historian Minas about completed quests will reward the player with up to 95 kudos. The quest stories result in filling the corresponding display case in the museum. After The Golem quest, the player will have stolen the statuette, which is why case 30 will be empty and stay empty. No kudos are awarded for completing it.

After all kudos have been obtained, the player will be awarded an antique lamp that gives 10,000 experience in any skill above level 50.

This section is a timeline, with all the exhibits in chronological order. The timeline continues upstairs.

The second floor of the museum

The 2nd floor[UK]3rd floor[US] contains several more display cases, along with a painting that is being reviewed by the Museum's only art critic, Jacques. There is also a central display of a gnome glider (10), as well as a portrait of King Lathas (46).

The basement is the natural history section. Here there are various creatures on display, including a red dragon, tortoise, desert lizard, Skeletal Wyvern, the Kalphite Queen, a terrorbird, snail, two sea slugs, a snake, penguin, camel, leech, the Giant Mole, and a monkey.

Speak to a nearby natural historian, who will give a lecture about each creature. These lectures are the basis for the natural history quiz which follows.

Players may start the quiz by talking to Orlando Smith. After getting three questions right on one case, that case is done, and the player is granted 2 kudos. If a player answers an answer wrong, the previous answers will not be reset. It is also possible to be given the same question more than once; getting them correct will still give the player kudos. Completing the quiz grants a total of 28 kudos.

Once all questions on every display case are answered, players may talk to Orlando Smith again to receive 1,000 experience in Slayer and Hunter.

After Orlando Smith is killed during the events of the The World Wakes, he is replaced by Mark Brodie.