From the RuneScape Wiki, the wiki for all things RuneScape
Jump to navigation Jump to search
The Old School RuneScape Wiki also has an article on: osrsw:Tears of Guthix cavern

The Tears of Guthix cavern is used in the Death to the Dorgeshuun, Tears of Guthix, While Guthix Sleeps and The Chosen Commander quests. It is also the location of the Tears of Guthix. The upper level of the cavern can be entered through the Lumbridge Swamp Caves, or with a games necklace after Tears of Guthix has been completed. The lower level connects to the Ancient Guthix Temple, which can be entered during While Guthix Sleeps as part of the quest and afterwards for players seeking to slay tormented demons. During The Chosen Commander, players at one point unintentionally visit a small side-cavern that connects to the cave but cannot be re-entered afterwards.

The cavern has an immense chasm in its centre. Light creatures can be seen flying about the chasm. To ride the light creatures, however, players must use lit Sapphire lanterns to attract the creatures, and then they have the option of going across to the magic stone ores or down into the chasm.

The cavern was exposed after an earthquake broke down the passage linking the cavern to the Lumbridge Swamp Caves. 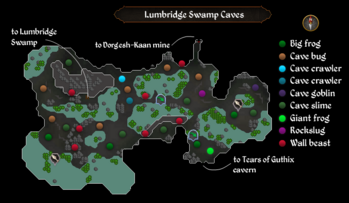 Ways to get there:

The cavern consists of two major areas, the upper level and the lower level.

The north ledge connects to the Lumbridge Swamp Caves. Juna sits on the east ledge, guarding the Tears of Guthix. The southern ledge and magic stone mine can only be accessed by using a sapphire lantern on one of the light creatures which float in the central chasm. 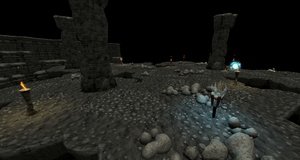 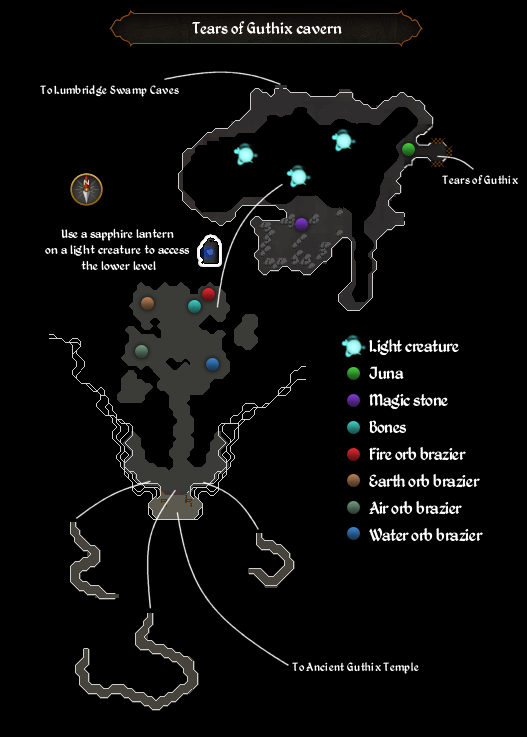 This information has been compiled as part of the update history project. Some updates may not be included - see here for how to help out!
Retrieved from ‘https://runescape.wiki/w/Tears_of_Guthix_cavern?oldid=35744885’
Categories:
Hidden category: