The Guilded Eggstravaganza was a temporary holiday quest which was part of the 2019 Easter event. It featured the Easter Bunny and apprentices of the Cooks' Guild, Crafting Guild, and Fishing Guild celebrating the start of spring with an Eastertime Fete. 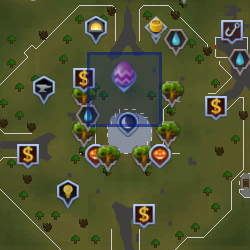 To start, talk to the Easter Bunny at the Lumbridge Crater. He will explain that this year, instead of the Spring Fayre, the Eastertime Fete is running. However, he requires you to help each guild apprentice with their competition in who can celebrate Easter the best. Each apprentice can be assisted in any order.

Talk to the Cooks' Guild Apprentice north-east of the Easter Bunny. He needs help creating a 'cake of pies', which is a combination of an uncooked berry pie, an uncooked meat pie, and an uncooked apple pie all inside a cake tin.

With these four items, cook on the range just behind the apprentice. However, the idea is not received well by the Cooks' Guild Journeywoman, who insists something else be baked. The apprentice brings up the idea of creating a lemon pie, which requires an egg, a pie shell, and a luxurious lemon. A lemon can be obtained from the crate just west of the apprentice. Use the lemon on the pie shell to create an uncooked lemon pie, then bake it on the same range into a lemon pie. Bring it to the apprentice, who will thank you and reward you with 200 crystallised chocolate fragments.

Talk to the Crafting Guild Apprentice north-west of the Easter Bunny. She explains that she had an accident a fortnight ago and since then she has not been able to use her hands. Offer to be her hands, and explain what experience you have making eggs (any option is fine). She then explains that she wants to create the Gilded Imperial Egg, a very regal egg fit for royalty. The egg requires a gilded base of purified gold, with a Verdigris enamel, which requires 15,000 gold ore. It is then adorned with several flawless gems.

Fortunately, only one gold ore is required, as well as a pot of salt. The pot of salt can be obtained by filling an empty pot at the barrel of salt next to the Cooks' Guild Apprentice. Return the items to the apprentice, who will tell you to heat them up in the nearby furnace, east of the apprentice. Heat the gold up two times, then take it out to retrieve the gilded imperial egg base. Give it to the apprentice, who will now request a bucket of vinegar and copper ore. The vinegar can be obtained by filling a bucket up at the barrel of vinegar next to the Cooks' Guild Apprentice.

Return to the apprentice, who will combine the items into an oxidised copper bar, as well as giving you soaked ashes, oxidised iron dust and crushed glass fragments. Craft the unadorned imperial egg on the nearby workbench after many gruelling moments. The apprentice will now give you a bag of flawless gems, which must be used on the egg to adorn it. Return the gilded imperial egg to the apprentice, who will say it is 'eggceptional'. Just like the Cooks' Guild Apprentice, you will receive 200 crystallised chocolate fragments for your effort.

Talk to the Fishing Guild Apprentice on the south-east side of the crater. She will explain that the Fishing Guild wanted to create a "swordsharkuna" for the Fete, a tuna stuffed inside a shark, stuffed inside a swordfish. Unfortunately, because of the Great 5th Age 'Poturducken' Incident, King Roald put a ban on the creation and consumption of multi-stuffed meals. The apprentice recommends you try and appeal the ban.

Talk to Ames the Courtier who is west of the Easter Bunny, between the Crafting and Smithing guild areas. Ames states that he will repeal the ban only for the Fete if you get him a bouquet of flowers from the Lumbridge General Store, who are for his mother. Travel to the General Store east of the crater. Ask about flowers for Easter, and purchase a beautiful bucket of flowers (and not a bouquet) for 10 coins. Give the flowers to Ames, who will give you a repeal of royal decree. Return the repeal to the Fishing Guild Apprentice, and attempt to help her create the swordsharkuna. Unfortunately, you are not able to perform such an act, so the Fishing Guild Apprentice rewards you anyway with 200 crystallised chocolate fragments.

Return to the Easter Bunny and explain that you have finished helping all guilds. However, the Easter Bunny can not pick a winner, and lets you decide on a winner. Pick any winner you wish, and the Easter Bunny will award the egg to the winning guild. However, once the egg starts moving, the winner does not want the egg anymore, and instead you end up with the reward. 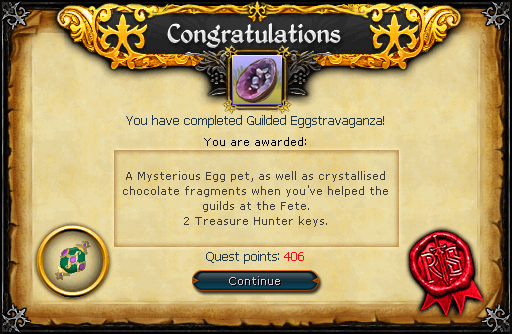