The music playlist is a feature added to the Music tab with the Music Playlist update on 8 February 2010. The feature allows players to select up to one-hundred music tracks from the Music Player to be "favourited". These will be played when the playlist feature is turned on. A music track is selected to be added to the Playlist by clicking one of the green boxes beside each track. Tracks can be moved in the playlist by clicking and dragging them, or they can be removed by ticking the red box on either the full list of tracks or from the playlist itself.

The "Shuffle" option plays a random track from the playlist and the "Clear" option removes all songs. If the playlist is not selected to be on, random tracks specific to the area will play as normal unless interrupted by a jingle such as levelling up a skill or updating a Grand Exchange offer. When this happens, the soundtrack playing is paused for the jingle, and generally restarts afterwards. 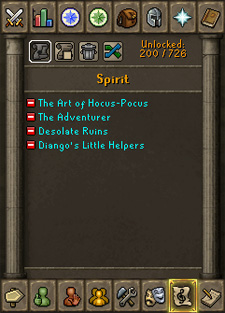 A screenshot in the Game Guide with 726 music tracks listed.
Retrieved from ‘https://runescape.wiki/w/Music_playlist?oldid=35685108’
Categories:
Hidden category: