From the RuneScape Wiki, the wiki for all things RuneScape
(Redirected from Zuk)
Jump to navigation Jump to search
The Old School RuneScape Wiki also has an article on: osrsw:TzKal-Zuk
This article is about the boss. For the achievement, see TzKal-Zuk (achievement).
Loading...
MonsterNPC 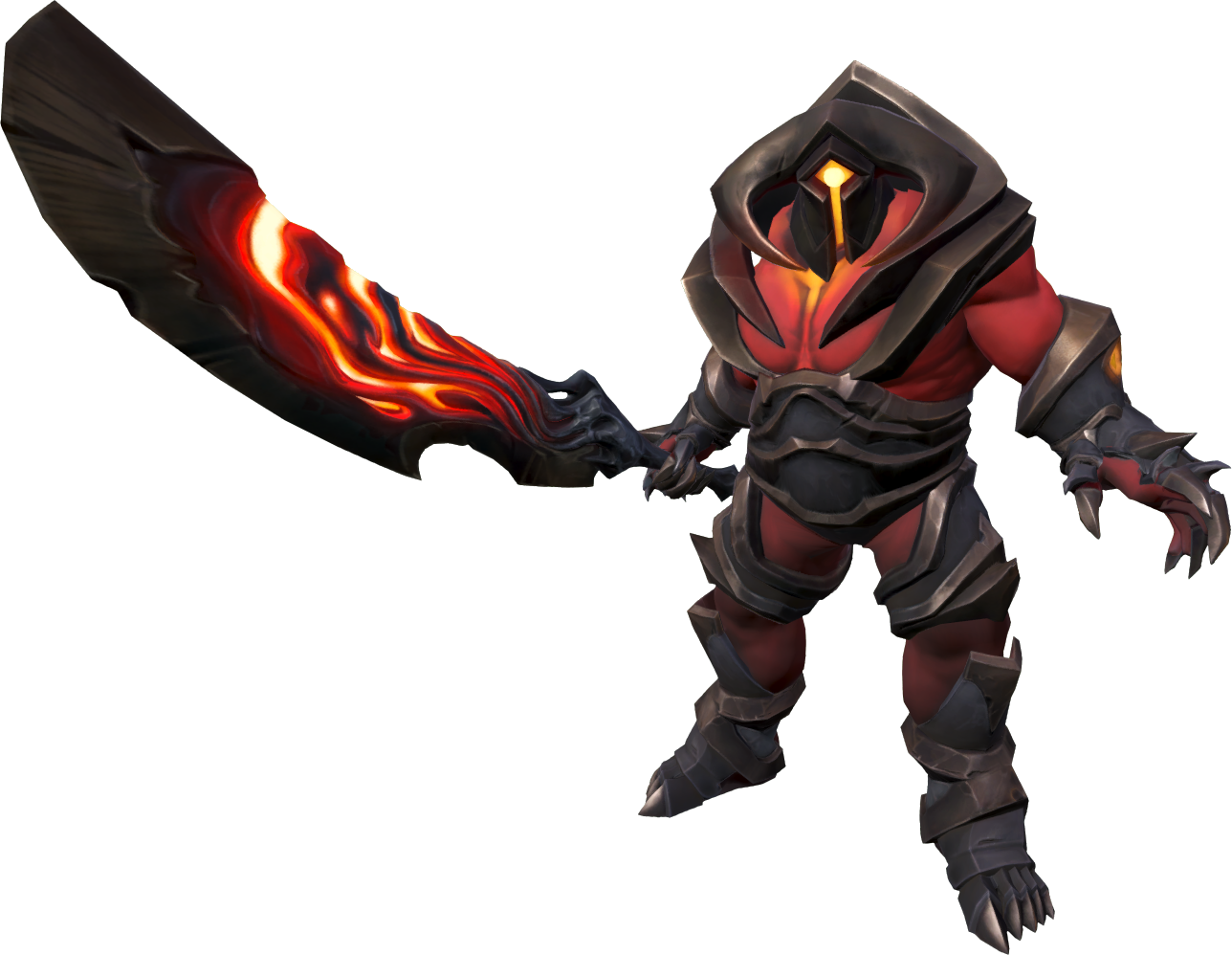 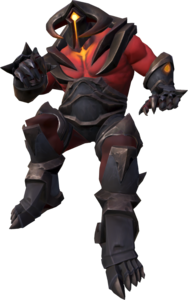 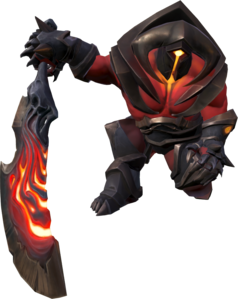 TzKal-Zuk (meaning Zuk, Champion of the Fire) is a demigod warlord who leads the TzekHaar Front in the Elder God Wars Dungeon and currently the strongest monster in RuneScape.

Before facing TzKal-Zuk, players must fight through 17 waves of TzekHaar to prove their worth to him. He is the final enemy in the encounter, with a checkpoint before directly fighting him. Unlike his spiritual predecessors and the Old School RuneScape version, however, dying against him or the build-up waves are considered unsafe. All drops, from both him and his minions, are sent to the challenger's chest.

Drops from the boss include the Scripture of Ful, Magma Tempest ability codex. Completing a fight without using any checkpoints (that is, the player must complete the entire encounter in one sitting without dying or teleporting) grants an igneous stone which is used to upgrade a TokHaar-Kal cape to an Igneous version. Completing hard mode "flawlessly" grants the ability to combine all three Igneous Kal capes and create the Igneous Kal-Zuk, a hybrid cape with the stats and passive effects of the component capes.

In hard mode, parts of his sword are dropped, which can be fused to create a tier 95 two-handed melee weapon. In order to access the boss' hard mode fight, the player must have obtained the Make Way, I'm Coming Through achievement.

Obtaining all unique drops from TzKal-Zuk completes the Are You Not Entertained? achievement which awards the title, TzKal-[Name].

Zuk was originally a human who led a tribe of people near the end of the Second Age.[1][2] He was the strongest in his tribe and considered Gielinor to be a free world until the Zarosian Empire invaded his lands, throwing him into Senntisten's colosseums as a gladiator. He defeated all of his opponents; humans, vampyres, dragons and demons. The tribune Torva soon took note of his talents and challenged him to a duel, in which Zuk defeated the famed warrior. With newfound respect for him, Torva used his connections to grant Zuk freedom.

Despite being a free man, Zuk sought a greater challenge and eventually learned of the Elder Kiln and its TokHaar inhabitants; making his way there, he fought the TokHaar for days on end. Just as he was about to collapse from exhaustion, the TokHaar-Hur came, with the collective TokHaar agreeing that he had been the first outsider to beat them all. The TokHaar-Hur brought him into the Kiln, where he recovered and subjected himself to more training. Spending centuries in the Kiln, he remade himself, ascending into a demigod in the process. As a likely result of his indomitable will, he did not share the TokHaar hive mentality that was typical of everything remade with the Kiln's sacred lava.

When the Gielinorian God Wars broke out, the TokHaar had no interest in participating. Zuk did not care and took lava creatures from the tunnels surrounding the Kiln into battle for glory. They emerged in Feldip Hills, where they began cleaving all on his path. Saradomin and Armadyl were quick to notice his arrival; the two gods, worried that Zamorak would propose an alliance with Zuk, amassed their forces in southern Kandarin, cutting Bandos off from his people while sending another force to keep Zamorak occupied. Bandos was allowed safe passage to his lands if he would deal with the troublesome demigod, which he eagerly agreed to.

Bandos immediately confronted him and his armies with his own as promised and the two clashed for days, both of them evenly matched in pure strength. However, Bandos was wittier and was eventually able to push the demigod to a ravine, where he had placed geomancers beforehand who summoned a large quantity of rock onto Zuk, greviously wounding him. Zuk laughed and claimed that he would return stronger; in turn, Bandos dragged Zuk's mangled body back to the Kiln, where he placed ensorcelled chains that destroyed the limbs the Kiln tried to regenerate and mocked him, preventing Zuk from returning. Zuk acknowledged this as his first defeat, although he considered Bandos' actions to be cowardly.[3]

Zuk remained in the Kiln afterwards, seemingly unaware or uncaring of what happened above on the Kiln. When Ful sought to reclaim her egg, she broke Zuk free from Bandos' binds. Seeing the failures of the TokHaar during the Battle of the Monolith, she remade them into the TzekHaar, giving control of them to Zuk. Similarly to Kerapac, Zuk did not particularly care about his master's orders out of his own will[4], but nonetheless went to Senntisten to see the alliance that had been fighting against the Elders' forces, as he knew it was a once in a lifetime event that could not be passed up on.[5] General Graardor went into the sewers to face Zuk; while he was able to fight him, Zuk ultimately defeated the ourg and drove him out of his arena.

The World Guardian soon arrived to investigate, where Zuk met them. He was surprised to see them as a seemingly frail human[6] and told them that he came of his own accord, as he wanted to fight the gods with the strength he had gained; like the TokHaar, he expressed a distaste for the lesser gods, calling them beings that stole power rather than earning it themselves.[7] While Zuk was content with waiting for as long as possible for the gods to empower themselves, he told the World Guardian to fight before he became bored and made his move. The World Guardian challenged him, in which he sent numerous TzekHaar to test their worth; after killing TzekHaar-Aken, Zuk personally fought them. Despite his accumulated powers, he was ultimately defeated and appeared to be delighted to have found a worthy opponent to face.[8]

Zuk eventually emerged from the TzekHaar Front, most likely having grown bored. While he was a demigod, the gods could not focus on him while siphoning from the eggs, prompting Saradomin to try and destroy them. Seren refused to let them be destroyed and teleported herself and the eggs away from the cathedral. This freed Saradomin and Armadyl from their primary duty, allowing them to fight Zuk without any distractions. As the gods had grown significantly stronger from the eggs, Zuk was no match for them and eventually retreated back to the Kiln.

Zuk gives two drops upon defeat - one from his own table, and another from the elite TzekHaar drop table.