Zogre Flesh Eaters is a Feldip Hills area quest in which you must venture into the crypts of Gu'Tanoth, an ogre resting ground, now crawling with undead zombie and skeleton ogres.

Run for your lives...the zombie ogres are here for your flesh! An ogre ceremonial dance area, used to communicate with ancient ogrish ancestors, has been overrun with diseased undead ogres.

How could something like this have happened? And what sort of rewards could an enterprising adventurer gain from exploring the tombs of such a place?

Begin by speaking to Grish in Jiggig, located a short run south of Castle Wars and east of the fairy ring (BKP).

When you talk to him, he instructs you to leave the area immediately as it is infected with certain creatures called zogres. These zombie ogres are appearing from the ground and spreading sickness over the ogre ceremonial site. Ask if you can help, and he says that the underground burial dungeon must be the reason for the zogres' presence. 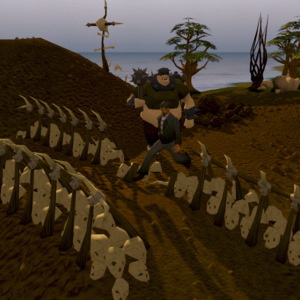 Jumping over the barricade.

Grish gives you two Super restore potions (3) and three cooked chompy birds (if you don't have enough inventory space, these will drop under your feet).

Talk to the ogre guard to the east, by the barricades. After you mention Grish's mission, he removes the barricade to allow you inside the zogre-infested area. Jump the barricade, and attempt to avoid the zogres and skogres while running east to a set of stairs going downward. Take these stairs into the dungeon. 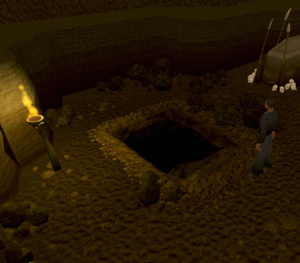 The skeleton leaning against the lectern

Proceed to the far north-west corner of the dungeon to an area with several ogre coffins. When you enter the room you will see a short cutscene where the contents of the room are focused on – a skeleton and an ogre coffin. Search the skeleton propped up on the broken lectern, spawning an aggressive Zombie. Kill it to obtain a backpack, which contains a dragon inn tankard, some rotten food, and a knife. If you take several minutes or leave the area, the zombie will disappear, forcing you to search the skeleton again.

The rotten food can be discarded. Search the broken lectern to find a torn page that contains a spell used to place a curse on the area, raising the dead "for all time"; also, the page reveals a guild emblem on closer inspection. Keep the page, as it will be needed later on. Search the coffin that the skeleton is facing, and unlock it using the knife and then search it again to obtain a black prism. You may fail searching the coffin several times. Head to Yanille to begin your investigation of the objects. 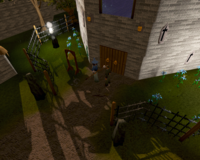 Go to the Dragon Inn, located in the southwest corner of Yanille, and "Use" the Dragon inn tankard on the bartender. The bartender explains that the tankard belonged to Brentle Vahn, a not-so-moral customer who was usually seen with a shady wizard. Talk to Zavistic Rarve on the 1st floor[UK]2nd floor[US] of the Wizard's guild or (if you do not have level 66 Magic to enter the Guild) ring the front bell to summon Zavistic. Using any of the individual items on him will not progress the quest.

Talk to Zavistic and show him the black prism and torn page. He mentions that although practising black arts is forbidden, studying it is not; a certain Sithik Ints was often seen reading about it. Sithik is on the 1st floor[UK]2nd floor[US] of the guest house north of the guild.

Proceed to the top floor of the guest house, and into the west bedroom. Sithik is ill and currently bed-ridden. Talk to him, and he denies any connection to the zogres. You tell him you will search the room for evidence. Search the drawers, the cupboard, and the wardrobe on the west side of the bed. You find a book of portraiture, a necromancy book, papyrus and charcoal, and a Book of 'h.a.m'. 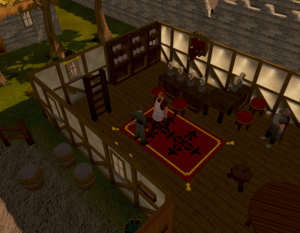 The Bartender confirming Sithik as the culprit 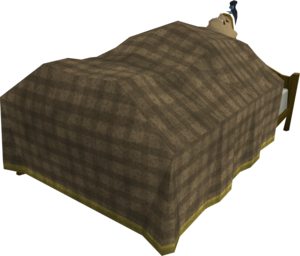 Sithik transformed into an ogre

Return to the magic guild, and talk to Zavistic Rarve about some items you'd like him to look at. He goes through the evidence automatically, starting with the necromancy book and the torn page, followed by the book of 'h.a.m.', the dragon inn tankard, and the signed portrait. This is enough evidence for him to gather more information from Sithik. He gives you a strange potion, which you must use on Sithik to solicit some answers.

Return to Sithik and try using the potion on him; he flatly refuses, so simply empty the potion into the cup of tea on Sithik's drawers. Go down the ladder and back up to find that Sithik has turned into an ogre. Talk to Sithik, and he confesses to being a H.A.M. member and provides information on the zogres.

He had hired Vahn to cast the spell to eradicate the ogres, and that it is irreversible. The only way to contain the disease is by containing the afflicted. The undead ogres can be harmed by a special type of arrows – 'brutal', which are made from flat sides of nails – providing powerful crushing power against the zogres and skogres. The cure from the sickness is by using the healing properties of rogue's purse and snake weed.

Obtaining the answers from Sithik and speaking to Grish unlocks the ability to make brutal arrows. Making these arrows (and the composite bow) yourself is not required to complete the quest, however, you'll only inflict half of the maximum damage when fighting against the final boss using arrows made from any other method. It can be killed with ordinary level 40 weapons, but it will take a while. If you decide to use brutal arrows and the bow, you can save time by purchasing them from the Grand Exchange, as obtaining the ingredients can take a substantial amount of time.

You can make an ogre composite bow after having Grish show you how to make one. It can be made by clicking on an achey tree log, with wolf bones in your inventory, creating an unstrung comp bow; this can then be used with a bowstring to create the finished bow. 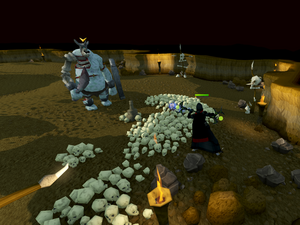 Slash Bash is easily attacked behind this safe spot

Return to Grish, and tell him what Sithik told you. Grish tells you that although he can shift the ceremonial grounds, he needs the sacred ogre artefact to move on and gives you an ogre gate key to obtain access to the ceremonial chamber. Following that, ask him if there is a more effective way to kill zogres. He shows how to use an ogre composite bow. Only after your conversation with Grish can you wield it. Climb over the crushed barricade again, dodge the zogres and skogres, and climb down the stairs to the east.

Head straight west to the side of the cave, and look for two successive ogre stone doors. Proceed through these using the gate key and descend the stairs. Head north-east, past the zogres, and then go east to the far end of the room filled with skulls. Search the stand amongst the skulls.

Do not use a summoning familiar while fighting Slash Bash, or else he will refuse to fight back and become unattackable.

A level 58 zogre named Slash Bash comes out from behind the skulls and proceeds towards you to attack. He switches between ranged and melee attack styles. If using ranged, use the ogre composite bow; it is recommended to use at least steel brutal arrows, while rune brutal arrows would provide the maximum damage. Attacking with melee and magic are more difficult due to Slash Bash's high defence against everything but brutal arrows. If the fight takes too long, he will stop fighting you and disappear.

If not using the ogre bow/brutal arrows method, the fight will be long but easy. Your hits will only hit about half or less than normal, but with 60 Defence, food is not even required.

Once Slash Bash is dead, pick up the two zogre bones, three ourg bones, and the ogre artefact he drops. Return to Grish for your reward. 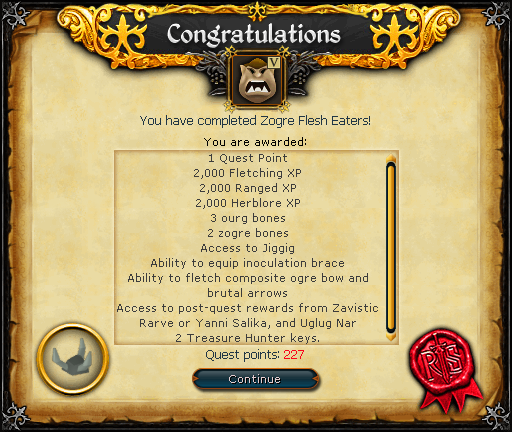 Zogre Flesh Eaters is directly required for the following quests/miniquests: