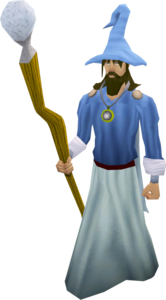 Zavistic Rarve is the Grand Secretary of the Wizards' Guild and answers the door as well. He is also involved with The Hand in the Sand, Zogre Flesh Eaters and Back to my Roots as well as the One Foot in the Grave miniquest.

Before the events of The Hand in the Sand quest, he had a wizard apprentice called Clarence. Clarence hadn't been seen lately, but Zavistic didn't particularly worry about that until the fateful day that Bert found a severed hand in the sandpit. Bert was understandably frightened about finding a loose appendage in his sand pit, and he asked the player to investigate the matter and see how it got there. After showing the Sandy hand to the Guard Captain and Zavistic, the stunned wizard realises that in fact the hand belongs to his student Clarence.

Later, the mystery leads deeper as the player finds out that Bert had recently been working longer hours for Sandy, owner of Sandy's Sand Corp, for no extra pay. This is revealed upon comparing the work rotas that were in the hands of Bert and Sandy's office. Not only that, but when the player returned to Bert to ask him about the rotas, it was revealed that Clarence had something to do with Bert, who had recently found a strange scroll in his house. According to Zavistic, the scroll was a mind altering spell scroll.

After Zavistic reviewed all the evidence, he asked the player to interrogate Sandy by means of a truth serum, (which is concocted with the help of Betty) mixed in his coffee and a Magical orb that will record the interrogation. In the end, it was revealed that Sandy had paid Clarence to cast a mind-altering spell on Bert so he wouldn't realise he was working extra hours for the same pay. Sandy then killed Clarence so he wouldn't have to pay him for casting the spell. To further hide the evidence, he dismembered Clarence's dead body, which he sent hidden in sand to the various Sandpits all around Gielinor. Clarence's right hand ended up in Bert's sandpit in Yanille, and his head ended up in Mazion's sandpit in Entrana.

The rest of Clarence's body parts were later moved to the Jade vine maze in the Karamja jungle following the release of a later quest, after which players had to retrieve the parts by killing the creatures within the maze.

He could be found in the alternate Wizards' Tower during the 2011 Christmas event.