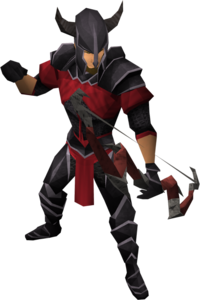 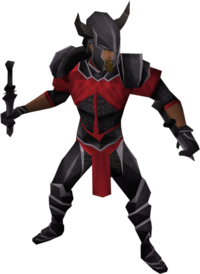 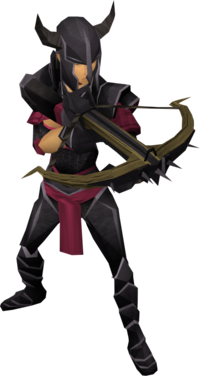 The Zamorakian sniper is a ranged-based monster fighting on the side of Zamorak in the Battle of Lumbridge. They drop Divine tears. They can only be attacked by players who have sided with Saradomin. Before being attacked by a player, they have 10000 life points, but after being attacked, their life points and stats lower, with the extent they are lowered varying depending on the combat level of the one who attacked them, with a minimum of 128.

They are capable of using abilities, however, and are dangerous in that regard. Upon first being attacked by a player, the first thing they will usually do is use a variant of Fragmentation Shot that deals less damage per hit than normal, but lasts for six hits instead of three, and still deals triple damage upon moving. Staying in the same spot and/or using Freedom will prevent considerable damage.

They could also use abilities including Binding Shot, Snipe, Bombardment, and the ultimate abilities Deadshot and Incendiary Shot, although their Incendiary Shot seems to do less damage than 40% of the player's maximum health.

They use abilities according to their current adrenaline; however, their adrenaline bar is always obscured by their combat status bar unless the player is not targeting them or is moving the camera angle.

Unlike most monsters including some other units in the Battle of Lumbridge, they move in running speed, making them difficult to catch up or run away from.