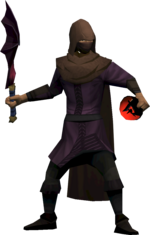 The Zamorakian leader is an enemy encountered during the River of Blood quest, alongside the Zamorakian bodyguard. He is part of the Morytanian splinter group, and previously appeared in Legacy of Seergaze as a mysterious person.

He attacks using magic, and uses magic abilities, including ultimate abilities. Both he and his bodyguard must be defeated in order to continue with the quest. When his life points are depleted to zero, he teleports away.