From the RuneScape Wiki, the wiki for all things RuneScape
Jump to: navigation, search
The Old School RuneScape Wiki also has an article on: osrsw:Zamorak wizard
"Zamorak mage" redirects here. For the Zamorakian mages inside Mage Arena, see Battle mage. 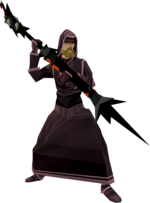 Zamorak wizards appear for coordinate clues only in the Wilderness.

Zamorak wizards are less dangerous than their Saradominist and Guthixian counterparts, as Zamorak wizards cannot poison the player, and only attack with magic, using the spells Fire Blast and Flames of Zamorak.