From the RuneScape Wiki, the wiki for all things RuneScape
(Redirected from Zammorak boss)
Jump to navigation Jump to search
"Zamorak boss" redirects here. For the Zamorakian general in the God Wars Dungeon, see K'ril Tsutsaroth.
This article is about the boss. For the character in lore, see Zamorak.
Loading...
MonsterNPC 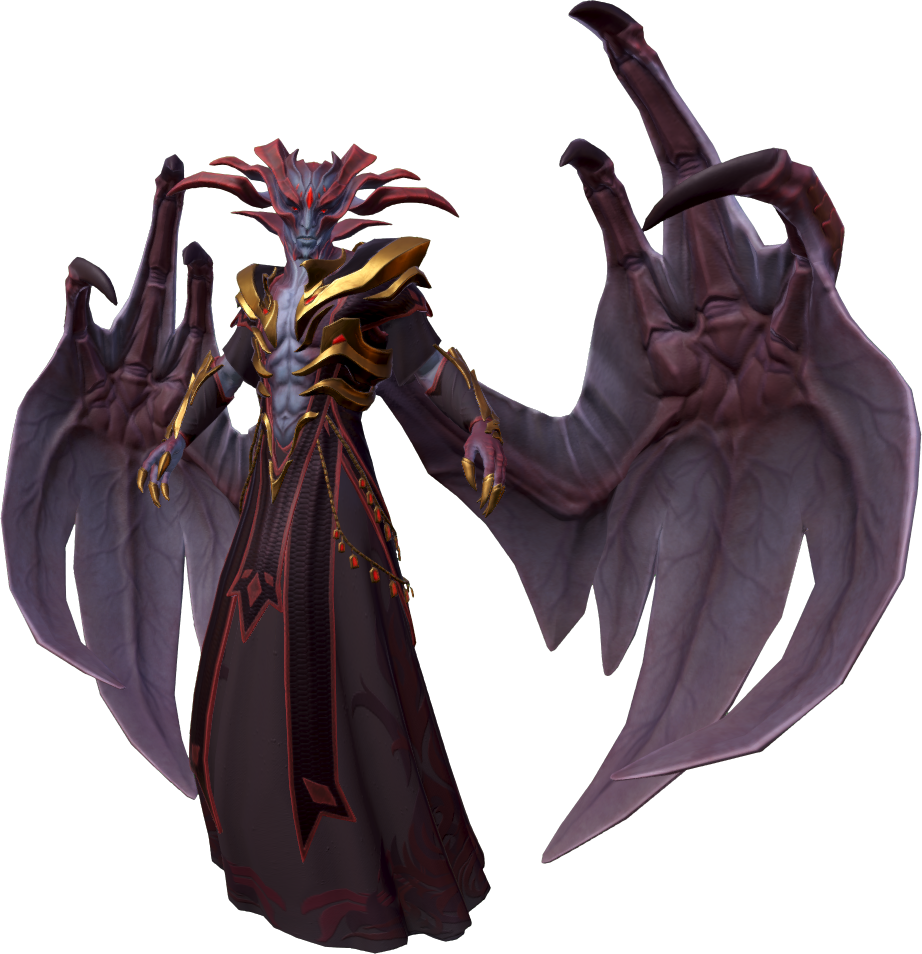 Zamorak, Lord of Chaos[1] is an ascended Mahjarrat and the final boss of The Zamorakian Undercity. Following the events of the Elder God Wars and his absorption of the Eye of Het's powers, he has fortified himself beneath the Wilderness inside the Vestibule of Futility where he has been opening portals to allow demons from Infernus to travel to Gielinor to aid his bidding in subduing the many human-governed cities.

With help from the Guardians of Guthix, the World Guardian has learned how to cast the Edicts of Guthix and intends to infiltrate Zamorak's fortress to cast them for a second time, aiming to banish all major gods from Gielinor once more.

Rewards from the encounter include a codex to unlock the Chaos Roar melee ability, the vestments of havoc set (a tier 95 melee power armour with passive effects), codices to upgrade Sunshine and Death's Swiftness into their greater variants, and components to create the Bow of the Last Guardian, a tier 95 longbow.[2]

Unlike the other final elite dungeon bosses, Zamorak can be immediately accessed upon completing the Conqueror of Chaos achievement, which requires 25 clears of The Zamorakian Undercity or 250% enrage, whichever comes first. The Zamorak encounter also utilises the enrage system, but unlike Telos, the Warden and the Arch-Glacor, Zamorak's enrage caps at 60,000%. However, his health is limited much like Telos' is at a specific enrage.[1] The kill streaking mechanic is not available at Zamorak.

Obtaining all unique rewards from Zamorak completes the Been There, Done That, Got the Z-shirt achievement which awards the title, Godslayer [Name].

Before the encounter, Zamorak is surrounded by six chaos witch channelers that work to corrupt the runes. Once the last channeler is killed, Zamorak will engage the team.

Much like Telos, the Warden, Zamorak utilises the enrage system. The player(s) will progress through six phases, each of which - upon successful completion of the phase - involve Zamorak and the player increasing their combat capabilities (in the form of buffs/debuffs/mechanics) by activating and uncorrupting a rune. In an encounter of 100% or greater, the fight is extended an additional phase, the last of which involves mechanics from four of the six runes and also reverses the activation order in the first six phases.

Upon Zamorak's defeat, a chest called the World Guardian's treasure appears by the Sword of Edicts for players to collect their rewards from. The rewards are rolled as soon as the chest is opened, with multiple rolls made. In enrage mode, the number of rolls increases with enrage. Rewards can be rerolled with a chaos die reroll token, generating a new chest of rewards, as long as none of the items were taken. This can only be done once per completed encounter and can potentially reroll into a signature drop. The chest can be right-clicked to access the bank.

Completing the Zamorakian Undercity in its entirety will slightly increase the value of total rewards alongside increasing the chances of a signature drop.

If the player dies as the fight ends, or if they exit the dungeon instance for any reason after defeating Zamorak, they are able to collect their loot from the treasure chest outside of The Zamorakian Undercity entrance by right-clicking the chest and selecting "Collect boss loot".

If a player has been chosen to receive a signature drop, an animation of green particles will surround their character. Whether the player receives a signature drop is decided as the fight ends, with the specific reward rolled upon opening the chest.

Rewards in story mode are reduced in quantity compared to normal mode and enrage mode.

Signature rewards can be obtained in all modes, with a significantly reduced chance in story mode. Only one of these items can be rolled per person, per kill.