From the RuneScape Wiki, the wiki for all things RuneScape
Jump to: navigation, search
The Old School RuneScape Wiki also has an article on: osrsw:Yt-MejKot 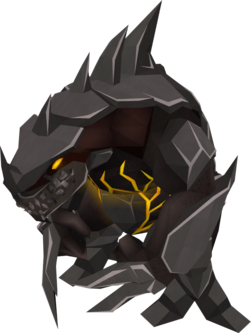 The Yt-MejKot (pronounced yit-mej-kot) is a monster found only in the TzHaar Fight Cave and in the The Elder Kiln quest. It appears first in Wave 15 of the Fight Cave. It resembles a very tall, bulky reptilian creature, armoured in obsidian plates. It only has one form of attack, a slashing melee attack. However, Yt-MejKot also has the ability to heal both its own life points and those of any other monsters around it once the target drops below half health. For this reason, it is ideal to try and kill them over enemies with reasonably high health such as the Ket-Zek if they are in the same wave.

These are large monsters, and are easily blocked by other monsters or the rocks in the cave. Yt-MejKots can rapidly heal themselves whilst in melee range, restoring 1500-3000 life points once roughly every 5 seconds, so it is highly recommended to attack them from a distance with ranged or magic to save time and resources. They can be used to heal on if Guthan's is brought, due to the fact they recover their life points using their ability.