From the RuneScape Wiki, the wiki for all things RuneScape
Jump to navigation Jump to search
The Old School RuneScape Wiki also has an article on: osrsw:Young tree
Young tree? (edit)? (edit) 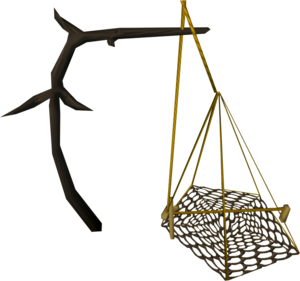 A young tree is primarily used in the Hunter skill to trap salamanders, but with level 60 Summoning, they can also be used to catch squirrels to use as pets. The player must construct the trap using one rope and one small fishing net. Players may dismantle the trap by right-clicking the tree and selecting "Dismantle". Once the player has caught a their target, the trap must be checked in order to receive the reward.

Adding bait to the trap will increase the odds of a successful catch. Different salamanders prefer different types of tar as bait, and squirrels prefer nuts.

This information has been compiled as part of the update history project. Some updates may not be included - see here for how to help out!
Retrieved from ‘https://runescape.wiki/w/Young_tree?oldid=35653173’
Categories:
Hidden categories: