You Are It is an intermediate bottle quest. During the quest, the player must follow a mysterious clue scroll and uncover the background of Uri Molotov. 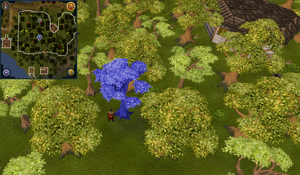 The start location of You Are It

To start the quest, head to McGrubor's Wood and chop a specific tree in the south-west section of the area, directly south of the fairy ring with the code ALS. It is a normal tree, not an oak tree, and contains a hidden clue scroll. Upon chopping it, a short cutscene plays where a double agent will appear and give you a mysterious clue scroll. Read the clue scroll to accept the quest.

The mysterious scroll appears to contain only the word "URIT" repeatedly, however, several of the words end in a letter other than T. Reading only the letters that are different spells out "RELDO". Go to Varrock Palace to speak to him.

Speak to Reldo, in the Library at Varrock Palace, and he will warn you that those with the clue scroll disappear and never come back. He signs it, and then it can be read again for a clue which reads: 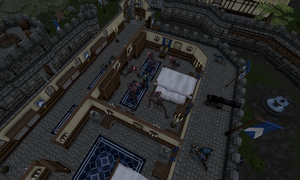 The double agent surrounds the player!

Go to Lumbridge and locate Duke Horacio, who can be found upstairs in Lumbridge Castle. Carry out the instructions on the scroll: un-equip all your items, use the cry emote, then the panic emote. A spark of energy will be released from the clue scroll after the first emote, and after the second you will enter a cutscene with the double agent in the form of a ripper demon wearing a hat, and several other Ripper Demons. A second cutscene will then play involving Duke Horacio and Uri. After both cutscenes, the clue scroll will update. 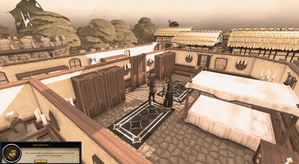 The Duke entrusts Uri with burying his late wife.

You will receive another clue which is:

Head to the location, which is in the Lumbridge cemetery, and dig to the west of the south-west light. You can dig by right-clicking your clue scroll like a normal Treasure Trail, there is no need to bring a spade. You will enter another cutscene, with Uri opening a chest full of letters, rags, and other useless items. Eventually, he finds some obsidian jewellery. You will then find a locked casket, and your clue scroll will be updated. 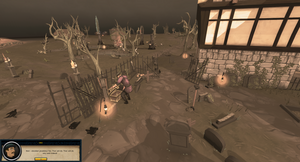 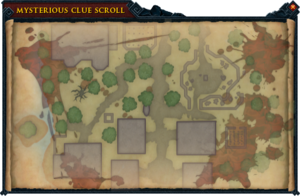 Check your scroll and you will find a map, which details the surrounding area of Rimmington. Head to the player-owned house portal there and enter it. After another cutscene, your clue scroll will update. Read it again for another clue:

A trip to Draynor[edit | edit source]

Head to Draynor Manor and enter the room to the west. Search the bookcase located in the north-west corner of the room to the west of the entrance. (It is the "non-standard" appearing bookcase next to the candles.) You will get a casket key. Use it on the locked casket in your inventory to receive an old necklace. Your clue scroll will update with a new clue. This time, it's a compass clue, which can be activated by right-clicking the scroll and clicking 'Scan'. If you don't have a rope yet, you can go into Draynor Village and buy some from Ned for 15 coins or 4 balls of wool. 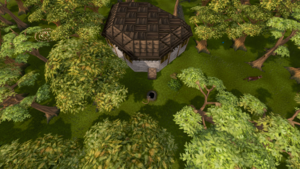 Like a normal compass clue, you need to follow the direction of the arrow to find the correct location. The clue points back to the quest's original starting location, McGrubor's Wood. Head just south of the house there, two steps south of the crate, and dig. This will reveal a mysterious hole, which you can add rope to in order to go down. Descend into the hole. 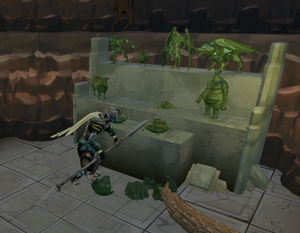 Destroying the Stone of Jas wishmaker.

Follow the passage and investigate the coffin. You'll receive Charos's journal and enter another cutscene with Uri speaking over Charos's grave. A voice booms in the cave, the ground shakes, and he is pulled into the earth. Speak to the double agent, who will explain what happened. In the past Uri attempted to rob the grave of Charos and was cursed as a result, forced to safeguard the treasures he would never own. When you're ready to proceed ask what happens next then leave the dialogue.

The journal mentions Charos working for Lord Drakan and ultimately creating a practical joke in tremendously bad taste that results in him going into hiding from the vampyres. The joke references Drakan eliciting Charos's help to locate a certain "stone". Head east to the mantle and investigate it, then destroy the statue in the shape of "The Stone". Choosing any other statue will cause a safe death and put you outside the crypt. You will obtain a puzzle casket and enter another short cutscene. Speak to Uri when it is over to complete the quest. 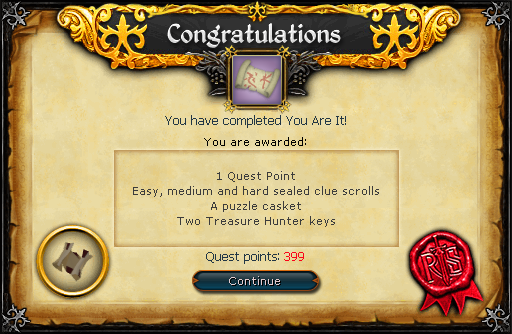 You Are It is directly required for the following quests/miniquests: