You're Not My Real Mah

You're Not My Real Mah is an achievement that requires the player to unlock all chronicle entries associated with elder chronicles, which requires catching 100 elder chronicles (10 chronicles for each memory). They must be handed in to the monument in Guthix's shrine to count towards the achievement. If you hand them into the energy rift, you wont get achievement progress.

Enhanced elder chronicles collected from the chronicle attraction prayer do still count towards the achievement.

Elder chronicles can be captured by training Divination at Elder Halls within Freneskae.

Players with access to Chronicle Attraction Curse and an Ancient elven Ritual shard along with a Grace of the elves will be able to maintain unlimited prayer points.

If a player is also yet to complete the Mahjarrat Memories achievement and plans on doing so in the future, it may be beneficial to gather the required memories in the Elder Halls so they can also begin obtaining Elder chronicles. This effectively completes both requirements at the same time. 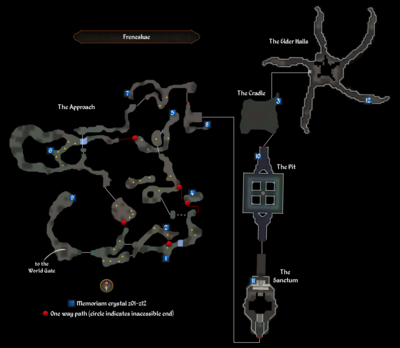