From the RuneScape Wiki, the wiki for all things RuneScape
Jump to: navigation, search
Yewnock's machine? (edit) 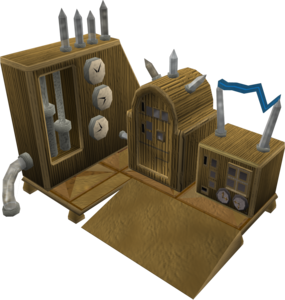 Yewnock's Machine is a device found beneath the Tree Gnome Village. It was originally constructed by Yewnock, son of the gnome Oaknock.

Yewnock originally designed the machine to banish illusions in fasion similar to the machine constructed by his father. Using crystal discs acquired from the elves, the machine could remove any illusionary magic in the area.

The machine is only known to have been used once, late in the Fourth Age. It revealed that a gnome disguised as a spiritual advisor was actually Glouphrie, an evil gnome that sought to overthrow the king of the Tree Gnome Stronghold. When his plan was foiled, he left the stronghold, and was not heard from until he used his newly established city, Arposandra, to launch a silent offensive on many areas of Gielinor.

When Glouphrie was revealed, the gnome he had been advising, Bolrie, was removed from the election he was attempting to win. The machine was passed on to Golrie, his heir, along with the rest of his elven possessions. It remains hidden in a storeroom beneath the Tree Gnome Village today. It can be reactivated during The Path of Glouphrie, but only by solving a riddle involving the crystal disks that operate the machine.

The machine can be "cheated" by dropping the disks at the chest and taking more out. This makes it easier to swap for the correct combination.