From the RuneScape Wiki, the wiki for all things RuneScape
Jump to: navigation, search
For other variants of this item, see enhanced.
Yaktwee stick? (edit)

The Yaktwee stick is an item used to hunt Charm sprites. Similar to the ogre bow in chompy bird hunting, this item keeps track of a player's catch count.

The counts can be used to calculate your experience from sprites and to know when your Adventurer's Log might be updated (Your adventurer's logs will display 100, 1,000 and 10,000 catches of each charm sprite separately).

There is only a reward for the 1,000th capture; after you've caught 1,000 charm sprites total (spread across all 3 types) you can upgrade your yaktwee stick to an enhanced yaktwee stick by talking to Yaktwee Swinmari Cianta. The enhanced stick grants you a 2% xp boost in ALL hunter activities in which you can wield the stick. When catching charm sprites it will also increase the amount of rarer sprites found when targeting a neverberry bush.

This one-handed item can be purchased from Yaktwee Swinmari Cianta just north-west of the Outpost near a cracked dolmen. A player must have 72 hunter to open the shop and buy the item. According to Yaktwee Swinmari Cianta, the stick is a combination of a teasing stick and a spirit shard. Unfortunately, the player cannot make this item themselves. 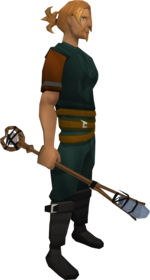