From the RuneScape Wiki, the wiki for all things RuneScape
Jump to navigation Jump to search
This article is about the ancient city. For the excavation site, see Xolo city excavation site.

The xolo city, also known as Saurthen, is a hidden city of gold whose ruins form part of the Orthen Dig Site, located beneath the Anachronia Swamp Fortress in south-east Anachronia. It is first accessible to the player at level 108 Archaeology after the completion of the Fragmented Memories mystery and offering a restored lingam stone at the door near the bonfire downstairs north from Laniakea. It hosts the xolo city excavation site. It was previously and might still be inhabited by the xolo, a group of small amphibian creatures.

The city was created by Skeka, who split her mind between the xolo in a failed attempt to transfer her consciousness to the Raksha[1][2]. There is also a moving chain of dragon metal in Saurthen, which is in place to imprison Raksha[3].

The presence of a gold rock in the city suggests that Skeka tried to create a proper Moksha device so she could restore her mind, but the results remain unknown.

The city would remain seemingly abandoned until the Sixth Age, when it was discovered by the World Guardian. Archaeologists began flocking to the site to excavate, but would hear hushed whispers and find their tools missing.[4]

An Orthen teleportation device can be found at the entrance to the city, on the surface level of Anachronia Swamp Fortress. To activate the device you need 20 quintessence and to have completed Incomplete Portal Network III research. 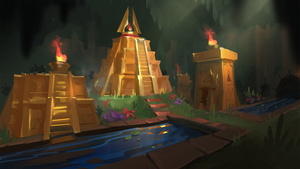 One gold rock is present within xolo city, which can be mined for gold ore.

Main article: I Am Become Death

Xolo city features one mystery, where the player learns the discovers more about the history of the city. Four lore fragments, found by excavating the xolo mine, xolo remains or the Saurthen debris, are required to solve it.

Xolo city features a second mystery, where the player investigates the buildings within the city and places the gold dish and 'Raksha' idol on the buildings and is imbued with a strange power. Successfully solving this mystery increases the available power at the mysterious monolith by 150 points.

Xolo city also features an opportunity for special research. The player may enable this particular research assignment by studying the xolo temple pyramid.

Three archaeologists can be found inside the city.