This article is about the species. For the Slayer monsters, see Wyvern and Skeletal Wyvern.

Wyverns are a species of reptilian dragon-like creatures, which for a long time were thought to be extinct. Their undead forms were believed to be the only remains of the race, until living ones were found beneath a cavern under their skeletal cousins. 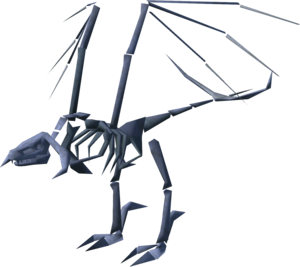 The wyvern is a relative of the dragon, although they also seem to be more closely related to lizards. Like the dragon, wyverns are capable of flight, using their two wings. Wyverns are considerably smaller than dragons, however, standing only slightly taller than the average human. Perhaps their most distinct contrast to the dragon is their lack of front legs. Instead, the wyvern possessed small claws on the ends of their wings.

Most wyvern remains can be found in the icy mountains of Asgarnia. This has led to speculation as to how the wyverns, unable to sustain their own body temperature, could survive in such cold climates. Two theories have been proposed; either that Asgarnia was much warmer entering the God Wars of the Third Age, or that the wyvern was able to produce fire internally much like a dragon. It is also possible that the Wyverns gained the properties of their cold mountain home and this is how they survived, as all their powers have to do with ice. This, however, may just be a species-related difference, and that they breathed ice anyway.

Although their diet remains largely unknown, it is likely they are carnivores and, like the dragon, ate livestock such as cattle and sheep. It is also possible that they feed on metal.

Wyverns are, unlike dragons, capable of internally creating ice, which they use as a powerful projectile weapon. With the appearance of living wyverns underneath the Asgarnia Ice Dungeon, they are also capable of attuning it to inflict poison on their enemies. However, their skeletal counterparts are incapable of poisoning their enemies, suggesting that they had lost organ(s) that were capable of doing so. Their body heat was unnaturally low, even after death, as bones found today still remain under room temperature. They may have been magically imbued, as skeletal wyverns emit a faint magical aura when attacking opponents with ranged.

Wyvern remains have been found only in the most coldest places of Asgarnia, such as White Wolf Mountain and Ice Mountain. The Asgarnian Ice Dungeon also contains animated remains, suggesting that they had also lived there when it was much colder.

The appearance of living wyverns underneath the Asgarnian Ice Dungeon supports the locations of their remains, as when the players enter their cavern, it is extremely cold to the point where ice forms around their view, restricting their line of sight and causing various effects when out in the cold too long. 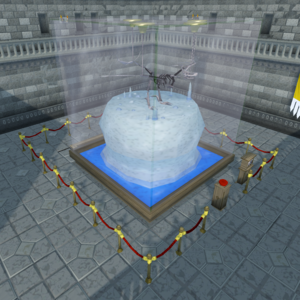 A display in the Varrock Museum concerning the wyverns.

The cause of the wyvern's apparent extinction is unknown. Some speculate they played an important role in the God Wars, and that their use as beasts of war may have reduced their numbers to near extinction. It is also possible that climate changes, perhaps brought on by the wars (but possibly completely unrelated) eventually reduced the wyverns' habitable areas to too small a size for such predatory animals. Their habitats may have also been too warm for them to survive in, as skeletal wyverns are found above the caverns where living wyverns can be found.

Odd wear patterns have been found on the bones of the animals, patterns which could have only occurred following the creatures' death. However there are still some Wyverns still alive as seen beneath the Asgarnia Ice Dungeon.