From the RuneScape Wiki, the wiki for all things RuneScape
Jump to navigation Jump to search
The Old School RuneScape Wiki also has an article on: osrsw:Wyrms
This article is about the creatures from the God Wars. For other uses, see Wyrm (disambiguation). 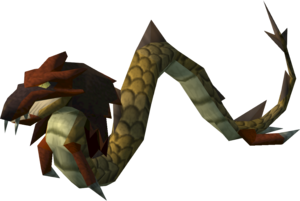 A desert wyrm, a small wyrm from the Spirit Plane

Wyrms are ancient creatures that were somewhat similar to the dragons of today, but are endangered from several thousand years ago due to heavy involvement in the God Wars.

When telling the story of the Tears of Guthix, the Guardian of Guthix Juna provides the only mention of these creatures: "The colossal Wyrms, of whom today's dragons are a pale reflection, turned all the sky to fire, while on the ground armies of foot soldiers, goblins and trolls and humans, filled the valleys and plains with blood".

Numerous variants of wyrms exist in both Gielinor and in other worlds. They are not all necessarily related, either. One variant of 'wyrm' seems to be an archaic spelling of 'worm' such as Strykewyrms, whilst another seems to reference the serpent-dragons of the Third Age.

Players can also summon the Desert wyrm summoning familiar and obtain the pets Freezy or Saul.