From the RuneScape Wiki, the wiki for all things RuneScape
(Redirected from World 111 glitch)
Jump to: navigation, search 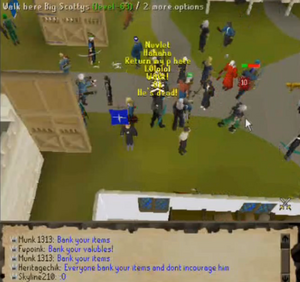 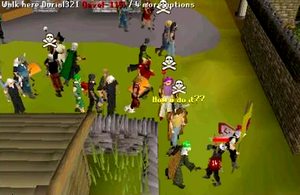 The Falador Massacre was an infamous glitch and subsequent violation of the bug abuse rule that occurred on 5/6 June 2006[1] in UK time, and 6 June in later timezones, which gave it the nickname the "6/6/6 glitch".

One of the major glitches in RuneScape history, it occurred when Cursed You, the first player to achieve 99 Construction, hosted a party in his player-owned house. Players who had engaged in combat activities in his house and were then booted from the house, somehow retained the ability to attack other players anywhere in RuneScape, outside of PvP areas.

Many players who gained this ability, against RuneScape rules, took advantage of it by attacking other players in crowded cities. A Jagex Moderator eventually took action by locking down the accounts of the massacre leaders. The players who took advantage of the bug were then given black marks, and those who killed a large number of players were automatically banned.

The glitch occurred immediately after a house party hosted by the first player to achieve 99 Construction, Cursed You. Due to the large number of players attending, the lag inside the house became severe to the point at which the host was forced to boot all of the guests. The players that had been inside the combat ring at the time of the dismissal, including Durial321,[2] were then able to attack other players anywhere in the world, spreading to Falador,[3] Edgeville, Rimmington, and Draynor Village.[4]

The victims could not retaliate unless they had also been affected by the glitch. The bug was not caused by the enormous number of people in the house at the time of the expulsion, but rather by an error in the coding of the Construction skill. The killing lasted almost an hour before Jagex Moderators were notified.

The bug was fixed and Jagex permanently banned many players. Mod Peter apologised to the victims who were attacked from this glitch, but no items were recovered, nor was the game rolled back.[1] While Cursed You was given a permanent ban in August 2006,[5] it was for real-world trading rather than his involvement in the glitch, as he did not deliberately cause it.

The Falador Massacre has been recognised as a historical event that actually took place in Gielinor's history. Canonically, the event took place between the Siege of Falador and the start of the Sixth Age; the official date for the event, according to a plaque erected in the victims' memory in Falador Park, is 14 Pentember in Year 169 of the Fifth Age which corresponds to the real life date and month it took place. References to this event are made during the Invasion of Falador, to which it played a role in displacing the Banner of Farradorn.

The tenth anniversary of the Falador Massacre was celebrated as a safe PvP event at the site of the original event starting on 6 June 2016. Following an announcement for a faux house party supposedly hosted by Cursed You on World 111 in Rimmington, players were teleported to Falador. The event then proceeded in two stages: in the first stage, players in the area were randomly possessed by the ghost of Durial321 and able to attack other players with either an abyssal whip, an ancient staff, or a dragon dagger, with victims unable to fight back; while in the second stage, a giant "boss" version of Durial321 would appear, which players could fight, along with fighting each other. The end of stage two, with Durial321's death, would trigger the restart of stage one, and so the event continued until its end.