Wolf Whistle is a quest that was released to introduce the Summoning skill. In it, the player helps the druid Pikkupstix with a Summoning experiment that has gone wrong. It was rewritten in an update on 31 January 2012 and is no longer required to access Summoning.

The venerable druid Pikkupstix is in a bind. He needs someone to help him with a little problem. Well, a large, angry, destructive problem, to be exact! Summon your courage and prepare to learn the deeper mysteries of nature, such as what druids keep in their basements, and how large a rabbit can get before it becomes a little too big... 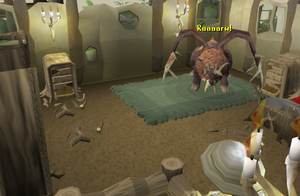 The giant wolpertinger notices the player.

Speak to Pikkupstix in Taverley. He will explain (between bursts of noise from upstairs in his house) that there is a Summoning obelisk underneath his house and that the source of the noise is a giant wolpertinger, a rabbit-like creature. He will also tell the player that he sent his assistant on an errand to find some items to help with the problem, but he has not returned. Pikkupstix will send you upstairs, so climb up the ladder, where you get to watch a cut-scene. Then talk to Pikkupstix again.

After the player has volunteered to help, take two wolf bones to Pikkupstix. These can be obtained by searching the corpse of Stikklebrix, a short way up the path to the top of the mountain, or by simply killing two white wolves that are wandering around White Wolf Mountain.

Return to Pikkupstix and give him the wolf bones. He will then give the player the following items: 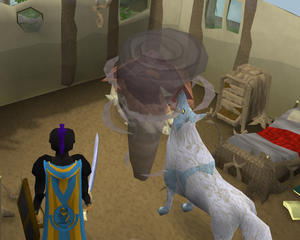 The spirit wolf scaring the giant wolpertinger away

Go upstairs again and your character will state that they will summon the spirit wolf, and a short cut-scene will ensue in which the wolpertinger will notice you. After the cut-scene, right click upon the spirit wolf pouch and select "Summon spirit wolf". This will bring up the Summoning control panel.

Right-click on the icon the Howl scroll at the top left of the control panel, select "Cast Howl", and then select the giant wolpertinger (it's similar to the "Use" option).

You'll get another cut-scene and your spirit wolf will disappear. Speak to Pikkupstix again. Go back downstairs to renew your Summoning skill points (right mouse click on the Obelisk). Finally, return to Pikkupstix to claim your reward. 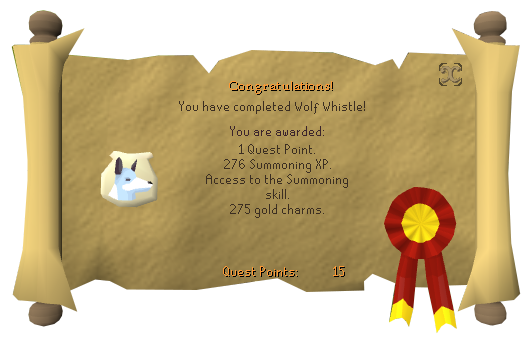