From the RuneScape Wiki, the wiki for all things RuneScape
Jump to: navigation, search
This article is about magic as it is in lore. For the player-used skill, see Magic.

Jack, one of the first humans on Gielinor, experimenting with runestones

Wizardry is the study and use of Magic. All magic ultimately derives from Anima, the energy, or "soul", that exists within all living things.[1] The most common way for humans to use magic is through the use of runes, which act as foci, channeling your own power.[2] It was the discovery of the rune essence mine and the subsequent easy access to magic that allowed humanity to thrive in the Fifth Age.[3]

The elder gods are the source of all magic and therefore are also the ultimate manifestation of magical power.[4] The gods of RuneScape are among the most powerful users of magic. Guthix is said to have shaped Gielinor from an empty plane left behind by the Elder Gods with the magic from the Stone of Jas. Runestones, the basics of magic, are created by harnessing the energy in the stone. Although this was merely belief, the TokHaar, creations of the Elder gods, are actually the ones who have shaped the world to perfection after the Elder gods created the basics.[5] Guthix merely modified it slightly, more to his liking and to make it more fitting for intelligent life. Guthix gave Humans, who he brought from other realms through the World Gate, these runes, and the land was dubbed RuneScape due to its abundance of runes. Guthix fell into a deep sleep, ending the First Age.

Jack was said to have created the first magic spell, Fire Strike by combining an air and fire rune in attempt to light a fire. Jack became a powerful mage eventually, and taught many Humans the ability to fight with magic.

Concluding the God Wars, the Fourth Age or "Age of Mortals" began. There was a limited number of Runes in existence, so magic was not widely practiced. At the end of the Fourth Age, rune essence was discovered by Fremennik barbarians. These stones were imbued with different elemental energies, and the basics of Runecrafting were discovered. However, this led to a schism in the tribe. One half believed that magic was useful, and part of human progression. However, the other half argued that use of the magic was defying the gods, as it was the gods' power. The first group separated, and became known as the Moon Clan.

During this time, the seers of the would-be Moon Clan had searched the land to find concentrations of magical energy. They created altars to these energies, and were able to bind them into the stones. The art of Runecrafting was spread all over Gielinor, and it led to human domination over the other races of the land. 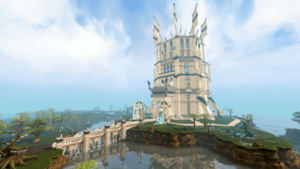 The Second Wizards' Tower, built in 70 after the first tower's destruction

From the years 42 to 62 of the 5th age, Fremennik tribesmen who feared magic crusaded against those who used it. The altars used to create the runes were destroyed, and the tribe was able to fight until the outskirts of Varrock, where they settled in Gunnarsgrunn.

In year 70 of the Fifth Age, a tragic series of events involving the discovery of teleport spells led to a massive explosion which destroyed the First Wizards' Tower completely. One of the two survivors, Perien the Blue, blamed it on the Red Order and Zamorakian wizards who wished to learn the art were denied entry to the Wizards' Tower when it was rebuilt by Perien, who became the first archmage of the Second Tower. Meanwhile, the Temple Knights' archives speak of an Operation:Phoenix, wherein the Zamorakians supposedly destroyed the first tower by means of a fire, and destroyed the work that the wizards had been working on. This is not true, however. Nowadays, Zamorakian organisations such as the Zamorakian Magical Institute are working towards obtaining the tower's secrets in the fields of magic and runecrafting.

Unlike players, non-player characters can specialise in very specific forms of magic, learning and creating new spells specific to their niche. Magicians who practice specialised magicks will often take a new title describing their study. These titles have the suffix -mancy.

There are many different magical traditions on Gielinor. These may have their own unique identity, magical practises and organisation. Magicians who belong to different traditions or are otherwise considered a different "type" of spellcaster may be referred to by different names. The exact definitions of the terms involved are not always clear.

Wizards are one of the most common types of spellcaster on Gielinor. They are characterised by their academic study of magic at institutions such as the Wizards' Tower, and their usage of runestones. Although popularly said to have a "gift" for Magic, one of the Wizards' most firmly held beliefs is that anyone can learn to use magic if they put in the effort.[6]

"Wizard" appears to be a somewhat protected title, as when Ariane was expelled from the Wizards' Tower she was no longer allowed to refer to herself as "Wizard Ariane".[7]

Witches and their less common male counterparts, Warlocks, represent an old magical tradition and are often distrusted because of their abilities.[8] The city of Falador has witch hunters.[9] Many witches use brooms and cauldrons, and they sometimes have green skin. It's common for witches to have their own menagerie of animals, for usage in spells and as companionship. [10]

A group of witches is known as a coven.

Soothsayers are practicioners of old magic common in the Wushanko Isles. They use intestines in their spellcasting and sacrifice animals like goats or chickens to do so. They draw the line at killing intelligent beings, however; that is the mark of an occultist.[11] [12] They are educated on the island Aloft Dagger.