Wizard Ellaron, is a senior wizard in the Wizards' Tower found on the 2nd floor[UK]3rd floor[US], Ariane's former master, and a major character in the Rune Memories quest.

He tutored Ariane in the arts of magic since she first entered the tower at the age of 10, and convinced her to embrace her talents as a Seer instead of trying to suppress them. Even after she was banished for consorting with the Lesser Demon that was held on the second floor of the tower, he still remained her supporter.

In truth, all of Ellaron's teachings were only to prepare her as a vessel for the souls of the first wizards of the ruined tower. Ellaron was a red wizard and a member of the Sacred Tradition of the Staff of Fire. Ellaron had planned to use Ariane's body as a bomb to destroy the Wizards' Tower, to avenge the former order of Red Wizards. As the player gradually draws out the soul fragments of the various ancient wizards, the members of the red order denounce him, and after freeing Ariane, they fly into his body and teleport him to the Abyss, where he is presumably either killed by the creatures that reside there or blown up by the raw magical power. 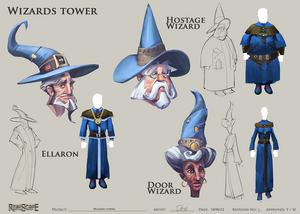 Transcripts Wizard Ellaron is the author or co-author of:

This information has been compiled as part of the update history project. Some updates may not be included - see here for how to help out!
Retrieved from ‘https://runescape.wiki/w/Wizard_Ellaron?oldid=35919689’
Categories:
Hidden categories: