From the RuneScape Wiki, the wiki for all things RuneScape
Jump to navigation Jump to search
The Old School RuneScape Wiki also has an article on: osrsw:Witchaven mine

The Witchaven Rubium Mine is a set of small rooms deep in the Witchaven Dungeon. It is used in the Kennith's Concerns quest. It contains 12 rubium veins spread across two rooms, which can be used during and after the quest. After completing the quest, leaving a room will immediately respawn all the rubium veins therein.

To get to the mine, first enter the Witchaven Dungeon. Proceed through the small opening in the wall found east of the staircase at which you arrive. Navigate the long, winding tunnel by using the agility shortcut or simply walking through it. After you climb over some rocks near the end, you'll see an Entrance along the eastern wall. This is the entrance to the mine. If you see a bed, you've gone too far south and should head back north. 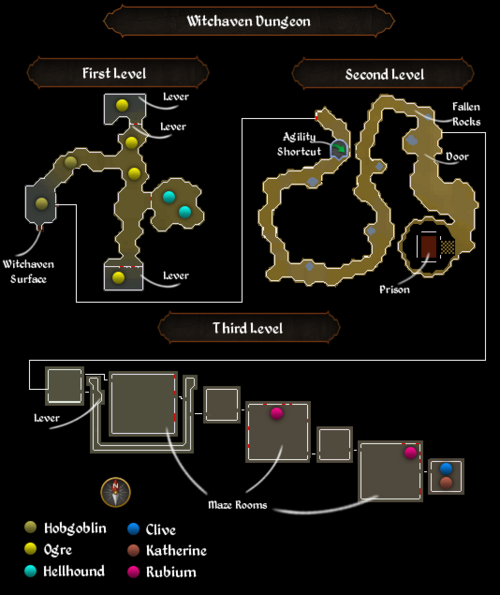 This information has been compiled as part of the update history project. Some updates may not be included - see here for how to help out!
Retrieved from ‘https://runescape.wiki/w/Witchaven_mine?oldid=35757443’
Categories:
Hidden categories: