Witch's House is a quest involving Harvey, a little boy whose ball had been lost in the garden of an unpleasant local witch, Nora T. Hagg. You are asked to retrieve it, having to figure out how to proceed in Nora's house along the way. 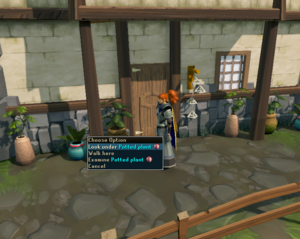 To start, head west of Falador past the agility shortcut in the wall. Talk to Harvey there, who tells you that he accidentally kicked his ball over into the witch's garden nearby and asks you to retrieve it for him.

After accepting the quest, head west to the front door of the house just north of Harvey, where Nora T. Hagg lives. Search the pot north of the door to find a key, and enter the house. 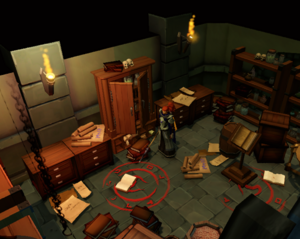 Inside, you'll find a diary on the table, which speaks of an experiment and how Professor Oddenstein installed security systems in the cellar and the garden door and guides you on how to pass them. It also mentions a secret compartment in the fountain.

Go down into the basement and search the nearby crate for a pair of leather gloves; you may need to search the box more than once to obtain them. While they are equipped, go through the metal gate and search the cupboard to find a magnet.

Go back upstairs, pick up the cheese from the side table and go into the small, southern-most room. Use the cheese on the mouse holes on the eastern wall and a mouse appears. Next, use the magnet on the mouse, who then passes through a mechanism, unlocking the garden door. Be careful to right click "Use" the cheese and not eat it! However, if you accidentally do, the cheese will respawn on the table. 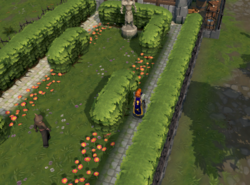 Sneaking past the witch.

Once you pass the unlocked door, you'll see the witch patrolling up and down the garden.

Make your way all the way around until you reach the fountain. Search the fountain and you will find the key to the shed. If you get spotted by the witch with the key from the fountain, you will need to repeat this process to collect another one to open the shed. 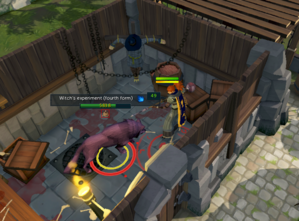 The final form of the experiment.

Make your way to the shed and use the key on it. Attempt to take the ball, and a Witch's experiment will appear. Do not try to take the ball again before you have killed all the experiments, because if you do your combat stats will be decreased.

Once you have killed the experiment in all of its forms, take the ball and head out.

Finally, after escaping the house with the ball, give it back to Harvey. 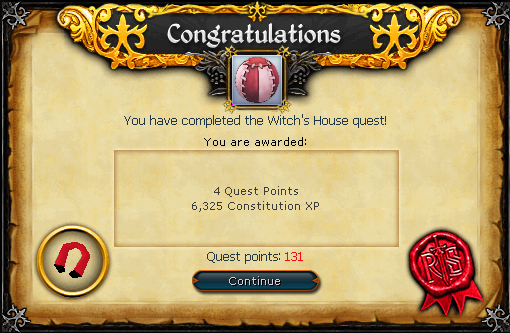 Witch's House is directly required for the following quests/miniquests: