The wishing well fruit was produced after depositing a certain amount of coins to a wishing well bush plant when it was fully grown. Opening it would yield items that could surpass the value of the amount of coins deposited, although there was a chance that they wouldn't. On 8 April 2019 the fruit was made unobtainable, and all existing fruit were refunded.

In order to open the fruit, 9 free inventory spaces were needed. The fruit could not be banked. After opening the fruit, the player would receive the message "You open the fruit and receive bounteous goods." When opening a wishing well fruit, you also had a chance of receiving a Crystal triskelion fragment. When you did, the chat box read: "In addition, you receive a part of a crystal key." Estimation based on a data sample of 503 harvests has shown this chance to be around 0.6%.

The value of the reward generated by the fruit was calculated out of the amount paid to harvest the fruit (which scaled to total level of the harvester, with the reward scaling between 25% and 300% of the calculated price). The quantity of the awarded items was based on the Grand Exchange value of the item. This led to an unsustainable positive feedback loop on the price for several of the possible rewards. The primary victim of this were seeds, as the other items had enough other uses that wishing well fruit alone were not enough to damage the price.

From release, this began happening to the other Harvest Heaven seeds that the well gave - barberry seed, prickly pear seed, fly trap seed, and sunchoke seed were possible rewards. Due to the low usage of these seeds, wishing well fruit gave too many of them, causing the price of them to drop. As wishing well fruit quantities were awarded based on GE value, wells gave more of the seeds, which made the price drop even more, and so on. The seeds rapidly crashed from their introductory prices to 1 coin each, so wishing wells regularly awarded hundreds of thousands of them.

To combat this, shortly after release the value of the awarded seeds were reduced to 1. On 27 April 2015 the quantities of the seeds awarded were capped at 100 per fruit.

This issue happened once again later, this time to calquat tree seeds. The seeds began declining in earnest in mid-2016 and eventually reached below 10 coins each in February 2019. These seeds were not recognised as a problem as early as previous seeds, meaning that the value of the seed was left as-is, allowing players to sell the seed to general stores for 104 coins each - an easy massive profit when hundreds of thousands of seeds could be obtained from the fruit for under a million coins.

The response to this was to disable the ability to open wishing well fruit on 7 March 2019.

Wishing well seeds, bushes, and fruit were removed from the game on 8 April 2019.

Upon login following the update:

As of the removal, most of the affected seeds had barely recovered to 7-10 coins each despite the earlier countermeasures. 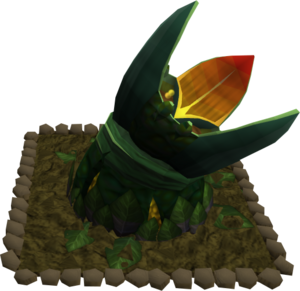 The total value of the items received from opening a wishing well fruit is based on the amount of coins paid to harvest the fruit. The value is expressed as a percentage of this input, where a percentage of 100% implies breaking even. The Jagex wiki lists that the value returned will be random between 25% and 300%. The remainder of this section is based on the data of 503 wishing well bush harvests, and does not take into account the cost of obtaining the seeds.

The return percentage is one of 7 possible percentages, albeit with a minor variation of up to ±2000 coins. These percentages, and the probability with which they are received, can be found in the following table:

This data allows us to calculate the expected return percentage on average over time, which is 98.23%.
On average, harvesting wishing well bushes will result in a loss.

This information has been compiled as part of the update history project. Some updates may not be included - see here for how to help out!
Retrieved from ‘https://runescape.wiki/w/Wishing_well_fruit?oldid=35688022’
Categories:
Hidden category: