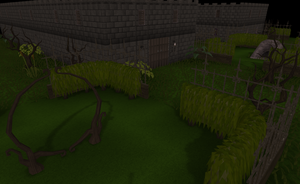 The entrance to the house.

The Wise Old Man's player-owned house was released together with the Love Story quest update on 5 July 2010.

A view of the house.

The house was owned by him many years ago, but was left to an old girlfriend Zenevivia after they fought and he left her to go adventuring. She took the house and changed it so that it was very advanced. During the events of Love Story, the Wise Old Man and the player return to the house in response to a challenge by Zenevivia to a duel. After getting past traps and monsters, the player gets to Zenevivia, fights her, then wins. After the events of Love Story, the Wise Old Man regains ownership, however players do not have access to the house after the quest, but they can make their house the same style this house is in. The Wise Old Man decided to leave this house because it contained too many bad memories.

This house is the first ever to be owned by an NPC, which is specifically related to the Construction skill. While one can access the Grim Reaper's house in various holiday events, his house is not specifically in the style of those that are constructed by players and hence should not be counted.

This house also introduces dungeon pits, which can only be built after the quest Love Story. During the quest, one is required to pass through a dungeon pit and this house serves as an introduction. In the quest, Zenevivia resides in a room with statues. This is a unique feature to this house as player owned houses do not currently support this type of statue - the nearest statue is the one gained through continued participation in the Distraction and Diversion Shattered Heart.