From the RuneScape Wiki, the wiki for all things RuneScape
(Redirected from Wilderness Warband)
Jump to: navigation, search 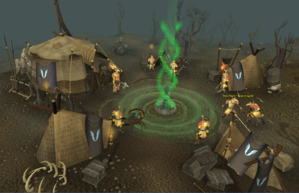 A warband of Armadylean bandits

Wilderness Warbands is a dangerous members-only Distraction and Diversion, composed of heavily defended storage camps guarded by the followers of the different Gods, though they fight more for glory and not for the gods themselves. These camps are founded to gain an advantage for the followers of a particular God once their God returns. They will set up camp in the Wilderness every seven hours, one time at each of the three locations. Quercus, an ancient seer ent, will send out adventurers to fight in the camps to balance the followers of the different Gods in Guthix's name. Quercus can be found just outside the Varrock Grand Exchange agility shortcut. Warbands events are synchronised on each world.

The activity was released on 25 March 2013 and was first mentioned in Jagex's special Behind the Scenes post.[1]

Wilderness Warbands give large amounts of experience in Farming, Construction, Herblore, Mining, or Smithing. While no combat is necessary and no items are needed to loot, it is still recommended to have a high combat level before attempting a warband as any player can attack a player whose inventory contains any warband supplies.

Looting a warband tent will skull players. Players are advised to not bring any items that they do not wish to lose.

Looting a warband camp (or attempting to for ironmen players) is an elite Wilderness achievement.

The next Warband begins in:

As a new camp is set up every 7 hours, the time at which these camps takes place is repeated every week. Below are the times (UTC/Game Time) a camp is set up given the day of the week:

Players will be notified via a server-wide notice when a Wilderness camp appears. To find a camp after missing the notice, talk to Quercus in Edgeville, near the Grand Exchange shortcut. Quercus will also tell when the next camp will appear, if there is not one currently occurring. A wilderness sword 4 may be used to teleport directly to a Warband camp once per day while it is in your inventory. The teleport to active warband option is not available with the sword equipped.

Arriving at the camp[edit | edit source]

Players can then interrupt the god's magic beam in the middle of the camp by finding a spot outside the camp, but close enough to the beam in a direct line of sight. The draining/siphoning is similar to the Runespan and a progress bar will show when the interruption is complete. Do not beam the camp from the side where the two soldiers are fighting or you they will notice you. The side they are fighting changes at every event.

After successful interruption, players can then use the magic beam in the middle of the camp to summon reinforcement NPCs. Stay in a spot outside the camp, but close enough to the beam in a direct line of sight. The draining/siphoning is similar to the Runespan and a progress bar will show when the summoning is complete.

Succeeding in the sabotage will teleport in warband NPCs of another faction (apart from the warlord themselves) who will begin to attack the enemy. This also grants five additional minutes to kill the warband and loot the tents before the camp collapses. Failing to stealthily sabotage the beam results in the whole camp turning hostile without any reinforcements to distract them from attacking players, and only five minutes to clear the camp and loot the tents. Sometimes, high level players may want to intentionally fail to sabotage the beam so they can save time by not having to interrupt the beam/summon reinforcements and also dissuade possible enemy clans from coming to that camp, as an enemy clan would not have enough time to come to that camp before it collapses.

In order for the whole camp to be lootable, all of its original inhabitants must be cleared out. Players can intervene in the fight if they choose to, or let the NPC reinforcements clear the camp. Players should be careful when fighting the warbands, as they use abilities, and the general can execute powerful ultimate abilities, including a variant of Meteor Strike. Those abilities are preceded by a warning from the general when he says "Someone will pay", so it is possible to run behind one of the tents to hide from that attack (and also give any fellow players/allied NPCs some time to attack the general without taking any damage, as the general will stand still for several seconds before choosing a new target). Stunning the general after he said this warning will cancel the special attack but the stun must not miss for it to work. Destroy or Asphyxiate are guaranteed stuns.

The warlords have extremely high defence if the minions are not cleared beforehand, so it is highly recommended to kill them before focusing on the warlord.

If all of the reinforcement NPC's are killed and none of players had participated in the fight, the surviving enemies will teleport away (including the warlord), leaving the camp vacant, which players can still loot. 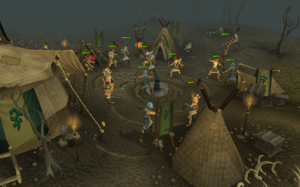 The warband camp has five tents, but only three out of the five tents will be filled with supplies, corresponding to a random mix of three of the five skills: Farming, Construction, Herblore, Mining, and Smithing. The two small tents are guarded by one of the weaker followers (who's generally the one standing outside the tent), while the larger tent is guarded by the warlord themselves. Simply killing the NPC linked to that tent will allow it to be looted, although all three guarding NPCs are cleared anyways to check the contents of each camp.

A total of 25 supplies per camp can be directly looted from tents before being able to go to Quercus to turn them in. There are only 1,000 pieces of loot in the camp, meaning that up to 40 players can take maximum loot.

Up to three camps can be looted and up to 75 supplies can be obtained every day, resetting at midnight UTC. The 3 camps looted must be on different worlds. Even if the player is killed and loses supplies, that attempt will still count as one of the three. However you can return to the same camp to try again without penalty. This generally means that you can loot a maximum of 75 items per day, but only if you manage to get the maximum of 25 from every camp. However, hopping worlds or relogging counts as another try for looting if the player has already made a previous attempt during the event.

Supplies can also be looted from other players by killing them and taking the dropped supplies. The 25 supply limit per camp does not apply to supplies picked up from player drops, but does apply to the daily 75 supply maximum. Once the daily limit has been reached, attempting to pick up more supplies from the ground by player killing will result in the message "You have already looted all you can for today." The same limits apply for supplies dropped due to being killed; that is, picking up the same 25 supplies due to being killed, after obtaining 75 for the day will be result in the message.

While looting supplies from the tents, players may randomly receive a wand of treachery. Looting a Wand of treachery will not count towards the 25 supply limit. If a wand of treachery has been looted, the game will announce to everybody in the vicinity that a wand has been found, and the player who has looted it will glow for 20 seconds, as well as have their Prayer points reduced to zero. Only one wand can be found per camp, though no looter is guaranteed to get it. If the player holding the wand is killed, the wand will be dropped for others to acquire. The next subsequent player to acquire the wand will not glow or have their Prayer points reduced to zero.

Logging out or disconnecting while inside the Wilderness will immediately remove all warbands supplies. Additionally, looting, then hopping to loot once more counts as another instance of Warbands against the daily three.

Once supplies are looted, players are tele-blocked and must walk/run back to Quercus to exchange them for rewards.

Various enemies may be encountered while looting camps. Two of each type of follower is in a camp, and each camp has one general. Attacking them will cause the player to automatically switch to multi-combat (if in single-combat).

Note: All followers are level 120.

(Players can be attacked by other players of all levels while participating in this activity.) 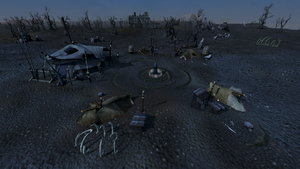 Note: Supplies are automatically destroyed if the player lobbies or tries to hop worlds.

Warbands grant experience in a number of skills during participation and additional rewards such as coins or experience are earned by trading in loot from the camp. Possible rewards include:

When handing in supplies to Quercus, the experience earned is determined by the formula:

where s is the number of supplies handed in and where x is the skill's level.

The Prayer and Summoning experience for the beam is the same as Master jack of trades aura, which means:

where x is the level of Prayer/Summoning.

Slayer experience from killing the camp leader is half of the Master jack of trades aura. This gives a formula of:

The supplies can also be handed in to Quercus for 4,000 coins each, totaling up to 300,000 coins per day if the maximum of 75 supplies are collected.